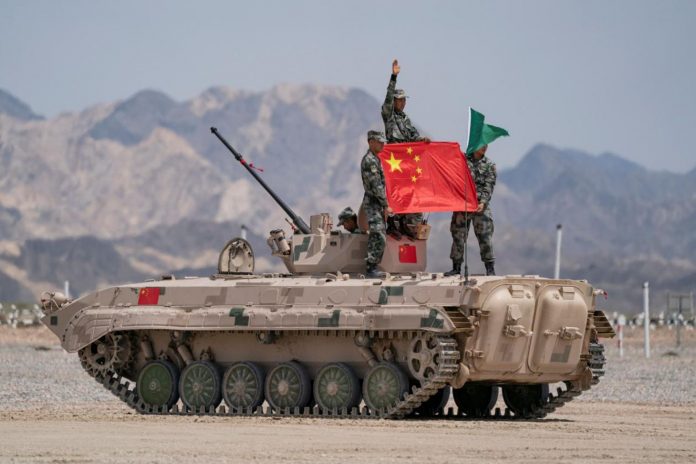 (TibetanReview.net, Jan06’20) – China began the first round of its military exercises in Tibet by deploying its latest weapons that included the Type 15 tank and the new 155-millimeter vehicle-mounted howitzer, reported the official globaltimes.cn Jan 5. The report cited military experts as saying the weapons were specifically designed with advantages for plateau regions and could play important roles in safeguarding border areas.

The report cited the official China Central Television (CCTV) as reporting Jan 4 that in the new year exercises, the PLA Tibet Military Command deployed helicopters, armoured vehicles, heavy artillery and anti-aircraft missiles across the region: from Tibet’s capital Lhasa with an elevation of 3,700 metres to border defense frontlines with elevations of more than 4,000 metres.

The report noted that the two weapons had been revealed to the general public at the National Day military parade on Oct 1, 2019 in Beijing.

The report cited Weihutang, a column on military affairs affiliated with CCTV, as saying their deployment in the Tibet Military Command will enhance PLA combat capability in plateau regions.

The report cited a military expert who asked not to be named as saying both weapons feature powerful engines, enabling them to maneuver efficiently in Tibet’s terrains.

The report cited Chinese military magazine Weapon as reporting the Type 15 tank was the world’s only modern lightweight tank in service, noting it was equipped with a 105-millimeter gun and advanced sensors that could “devastate enemy light armored vehicles in regions not suitable for heavy main battle tank deployment.”

The six-wheeled 155-millimeter vehicle-mounted howitzer is of a high caliber, reacts fast and could be easily deployed, the Weapon magazine was cited as reporting.