(TibetanReview.net, May21, 2018) – China has turned a once sleepy military controlled Tibetan Border area into a sprawling mining town populated massively by Chinese immigrants in a South China Sea-style move to wrest the Indian state of Arunachal Pradesh which it now calls South Tibet, reported the scmp.com May 20. It said a huge trove of gold, silver and other precious minerals – valued at nearly US$60 billion by Chinese state geologists – has been found. The unprecedented scale of the new mines was reported to have followed years of heavy investment by China on building roads and other infrastructure in the area.

Most of the precious minerals – which include rare earths used to make hi-tech products – are hidden under Lhunze County, a military stronghold China took from India by force nearly 60 years ago, the report said. In just a few years, it added, the discovery has turned the once quiet, remote county with 30,000 permanent residents, most of them Tibetan herders, into a booming mining centre.

People have poured into the area so fast that even local government officials could not provide a precise count for the current population. Enormous, deep tunnels have been dug into the mountains along the military confrontation line, allowing thousands of tonnes of ore to be loaded and transported out by trucks daily, along roads built through every village, the report added. 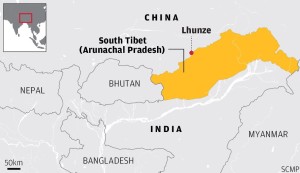 By the end of last year, the scale of mining activity in Lhunze was reported to have surpassed that of all other areas in the Tibet Autonomous Region.

The report cited people familiar with the mining plan as saying the breakneck pace of development in Lhunze, a traditional military stronghold heavily garrisoned by the People’s Liberation Army, was part of a determined endeavour by Beijing to regain full control of “South Tibet”, an Indian state as large as Austria with original forests, fertile farmland and rich natural resources.

Behind the possibility of “another South China Sea” rising out of the world’s highest mountain range are recent findings pointing to the value of the buried minerals, the report emphasized. It cited Zheng Youye, a professor at the China University of Geosciences in Beijing and the lead scientist for a Beijing-funded northern Himalayan minerals survey, as confirming that a series of discoveries in recent years put the potential value of ores under Lhunze and the nearby area at 370 billion yuan (US$58 billion).

“This is just a preliminary estimate. More surveys are under way,” he was stated to have said.

China conquered the most coveted part of “South Tibet” – the Tawang area – after launching a war against India in the fall of 1962. “But our troops had to retreat quickly because we had no people there to hold the land,” the scientist was quoted as saying.

In this connection the report pointed out that in Oct 2017, soon after the end of a tense military stand-off on the Doklam plateau over Chinese road-building – the worst confrontation between China and India in years – President Xi Jinping underscored Beijing’s claim to the area in a letter to a family in Lhunze, published in state media. While the president rarely replies to correspondence from the public, unless there is a special reason, in that case, Xi thanked the father and his two daughters for their loyalty and contributions to China, and also urged the people of Lhunze to “set down roots” to develop the area for the national interest.

However, the new mining activities seem to mean that the setting down roots activity involves rapid and significant increase in the Chinese population in the Himalayas, which, Zheng has been cited as saying, would provide stable, long-term support for any diplomatic or military operations aimed at gradually driving Indian forces out of territory claimed by China.

“This is similar to what has happened in the South China Sea,” where Beijing has asserted its claim to much of the contested waters by building artificial islands and increasing its naval activity, Zheng has said.

Also, Hao Xiaoguang, a researcher with the Institute of Geodesy and Geophysics at the Chinese Academy of Sciences in Wuhan, Hubei and a senior government specialist in China-India disputes in South Tibet, has said Beijing was likely to take the same approach to the Himalayas as it had to the South China Sea.

In fact, Hao has said, As China’s economic, geopolitical and military strength continues to increase, “it is only a matter of time before South Tibet returns to Chinese control.”

“What China [has] achieved today in the South China Sea was almost unthinkable a decade ago. I am optimistic [about] what will happen in the Himalayas in the coming years because President Xi has made it clear that ‘not a single inch of our land will be or can be ceded from China’, which definitely includes South Tibet,” he has said.

On the other hand, India has done little or nothing to carry out developments on its side of the border territory prompting local residents to move out of there to seek livelihood elsewhere. There only exists a 2013 study by Trilochan Singh, director of the University-Industry Inter-Linkage Centre at the Arunachal University of Studies and a former government geologist. Known resources in the state include coal, oil and natural gas, dolomite, limestone, graphite, lead and zinc, but the scope of the reserves has mostly remained unknown.

The situation today remains more or less the same as it was at the time of the study, as the natural resources in Arunachal “are not being harnessed at present”, Singh was quoted as saying.

Meanwhile in Lhunze County, people have come from across China. After nightfall, the bars and barbecue stands are filled with the sound of people speaking dialects from across China, the report said. They are miners and labourers, but there are also sleek salesmen and investors dressed in suits and shiny shoes, it added.

The report cited a Chinese woman running a laundry service who did not want to be named as saying she had about 30 to 40 customers a day, and although dry cleaning was expensive, that did not seem to bother her regulars. She has also said, “Most people here earn a decent income,” with an average monthly salary of 10,000 yuan.

Nevertheless, the Chinese government still tightly controls entry to Lhunze, with the report saying the county remained a restricted military zone. To go there, Chinese citizens need a special permit issued by the military at a security checkpoint and foreigners are barred from the area in most cases, it added.