(TibetanReview.net, Aug21’20) – China is constructing a surface-to-air missile site as well as other military infrastructure on the banks of the Mansarovar Lake in the India-Nepal-occupied Tibet tri-junction area near the Lipulekh pass, reported theprint.in Aug 20, citing new satellite images.

Citing an image shared by an anonymous satellite imagery analyst, who goes by the Twitter handle @detresfa_, the report said new roads were seen built to a village while suspected red tents had been put up for accommodation.

The image was also reported to show a surface-to-air missile (SAM) site on the banks of the Manasarovar. China is said to hold one of the world’s largest inventories of advanced long-range SAM systems incorporated into SA-20 battalions imported from Russia and indigenously-produced CSA-9 (HQ-9) battalions.

Media reports were cited as saying China had mobilized a battalion strength of People’s Liberation Army soldiers near the Lipulekh pass across the Uttarakhand state of India.

India was reported to have responded in kind, deploying in June its advanced very quick-reaction SAM defence systems in eastern Ladakh.

“Geospatial data collected over the last few months points to the construction of a SAM site, along with the possibility of troop accommodation in the nearby area,” the report quoted the analyst behind @destresfa as saying, adding that the development was around 100 km from the international border. 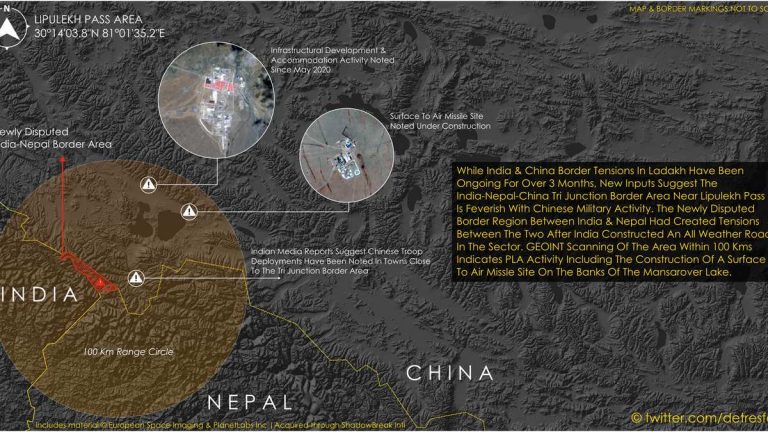 The tri-junction became a point of controversy after India inaugurated a new road in May, called the ‘Kailash-Mansarovar Yatra Route’, which almost goes up to Lipulekh Pass at the India-Tibet border, 17,000 feet above the sea level. It led an angry Nepal to issue a new political map showing the areas of Kalapani, Lipulekh and Limpiyadhura — which are the subject of an India-Nepal border dispute — as part of its own territory.

Previous satellite images were reported to show a large concentration of troops in Tibet and the use of possible tunnels to amass equipment.

Despite both diplomatic and military talks at different levels between the two sides, the faceoff between troops of the two countries at the Line of Actual Control in eastern Ladakh remains stuck in a stalemate, prompting both sides to increase troop build-up along the entire LAC. Both sides are looking at a long haul lasting through the winters even as talks continue.