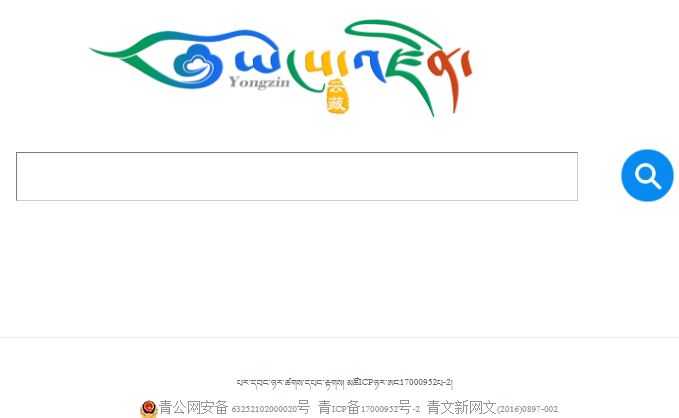 (TibetanReview.net, Apr26, 2018) – The world’s first Tibetan-language search engine set up by China and having a staff of 100 is meant to counter “inaccurate” information that do not support Beijing’s version of the issue of Tibet, reported globaltimes.cn Apr 24.

The search engine, yongzin.com, launched in Aug 2016 at a cost of 23 million yuan ($3.6 million) has a staff of 100 and an average of 10 million visits per day, the report cited Laji Zhuoma, president of yongzin, as saying.

Speaking during the 1st Digital China Summit, which was held from Apr 22 to 24, in Fuzhou, East China’s Fujian Province, Laji has said the search engine could help provide accurate information about China’s Tibet Autonomous Region.

“Some foreign Tibetan-language websites provide inaccurate information, such as the distortion of the actual living conditions of Tibetan people. So we developed the search engine to link curious Tibetan-speaking netizens with accurate information provided by government-approved news portals,” she was quoted as saying.

She has cited the example of searching for “Dalai Lama” on yongzin.com, saying users will be linked to more than 200 domestic Tibetan-language news websites.

The report also cited Xiong Kunxin, a professor at Beijing’s Minzu University of China in Beijing, as saying the search engine that automatically provides links to government-approved news portals could help netizens have a correct understanding of Tibetan history, culture and religion.

Xiong has warned, “however”, that “the engine’s administrator and the country’s security departments should be on high alert for the possibility that the search engine may be used by ‘the three evil forces’ – terrorism, separatism and extremism – through technical means to promote extremism.”

The search engine is not only used by domestic Tibetan users but also by people from foreign countries including the US, Germany, France and Switzerland, the report said. While most domestic users were said to be more interested in searching for news as well as entertainment videos and music, many foreign users were said to prefer Tibetan books and related literature.