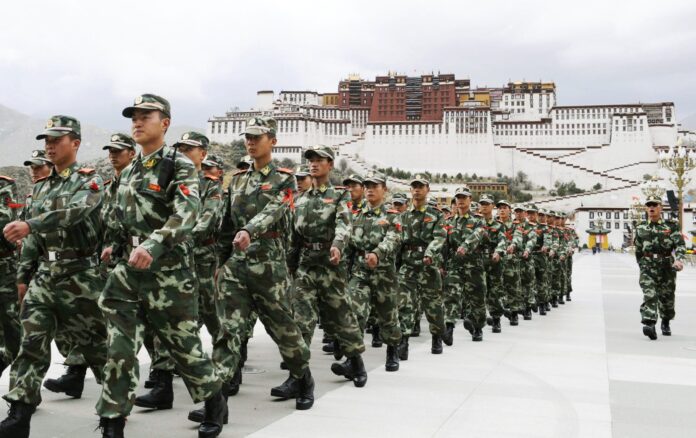 (TibetanReview.net, May01’21) – China is to carry out massive infrastructure development in the occupied Tibet Autonomous Region (TAR) over the next five years and beyond to turn it into a military hub to dominate the Himalayas, reported IANS news service Apr 30.

It said the Tibet infrastructure development projects had been included in China’s 14th Five Year Plan (2021-2025).

The report said that in addition, China’s Long Range Objectives-2035 identifies a number of strategic military projects for completion by 2025 and 2035.

To begin with, China will upgrade and extend the G318 Sichuan-Tibet Highway and the G219 and G331 national highways to run them along the southwestern border.

And then there will be a new 1,800-km Chengdu-Lhasa high-speed railway network, which will be the second strategic railway connecting the TAR with China, reducing travel time from Chengdu to Lhasa to just 10 hours.

Chengdu is currently the headquarters of the integrated Tibet-Sichuan military command that makes it possible for the People’s Liberation Army (PLA) to move strategic reserves swiftly from the borders with other Southeast Asian nations to beef up both offensives and strategic defence on the India front, the report noted.

Under current Chinese plans, Shigatse, Tibet’s second-largest city, will emerge as a rail transportation hub as work has begun on railways to link it with Jilong in Guizhou province and Hotan in Xinjiang province.

Also, China will construct at least 20 new border airports by 2025 in TAR, in places like Tashkurgan (in Xinjiang) and Longzi.

Tashkurgan, the last stop before the Karakoram Pass, is under the jurisdiction of the South Xinjiang Military District and the PLA could easily threaten the Daulat Beg Oldi and the Depsang Plains in LAdakh from there, the report noted.

It said the airport at Longzi (Tibetan: Lhuntse) in Tibet’s Shannan (Lhokha) County will also boost the capabilities of the People’s Liberation Army Air Force (PLAAF) in the middle sector of the Line of Actual Control (LAC).

“The considerably enhanced Chinese military presence will be a long-term potential threat for India,” he was quoted as saying.

“The document clarifies China’s national strategic intent and identifies the core areas of national security and development. It has a definite focus on strategic science and technology programmes in the frontier areas. The document details the projects that have direct implications for India,” Ranade has said.

He has said India’s worst concern was over the Chinese plan to construct a massive dam on the Great Bend on the Yarlung Tsangpo (Brahmaputra), which will be three times the size of the Three Gorges Dam in Sichuan province.

India says China can’t coerce, intimidate and kill on the border and then suggest good relationship in other domains