(TibetanReview.net, Oct06’20) – India has been reporting a steady decline in daily Covid-19 cases over the past three weeks but fresh infections in Kerala rose by 112% during this period, at three times the national rate, while Chhattisgarh saw a 93% rise, Uttarakhand 61%, and Odisha and MP 54%, reported the timesofindia.com Oct 6.

The country registered a 37% growth in cases during Sep 13-Oct 4, a decline from the 56% growth in the previous three weeks, the report said.

And while daily cases peaked around Sep 13, a total of 21 states and Union Territories have grown at a higher rate than the national average, indicating that the country may continue to see the pandemic surging in some parts of the country while cases fall in other places and possibly nationally.

Active cases now constitute less than 14% of the cumulative total.

The latest data from India’s Ministry of Health and Family Welfare show that there were 61,267 new cases and 884 new deaths in the country in the past 24 hours as of Oct 06 at 8AM, taking their totals to 6,685,082 cases and 103,569 deaths. The sharp decline in both the numbers have been attributed to less testing having been carried out on Oct 5.

Four states, namely Maharashtra, Andhra Pradesh, Karnataka, and Tamil Nadu have accumulated more than 620,000 cases each in that order.

Three other states/ Union Territories, namely Jharkhand, Jammu & Kashmir, and Uttarakhand had reported more than 51,000 cases each so far in that order. 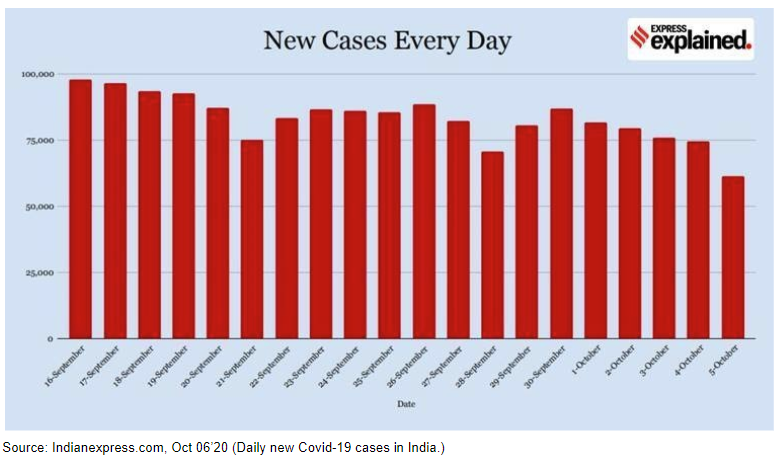 The total number of Covid-19 cases among Tibetans in India, Nepal and Bhutan had increased by 26 over the previous day to reach a total of 403 (↑26), of whom 175 were active, 214 had recovered and 14 (↑1) had died, according to the tally of the Central Tibetan Administration (CTA) as of Oct 06.