(TibetanReview.net, Aug20’20) – After seeing marginal declines in Covid-19 cases for three successive days, India witnessed a sharp increase to more than 64,500 on Aug 19 morning and this was a followed by a record high daily number of nearly 70,000 on Aug 20 morning, suggesting that the country is still far from reaching its peak before cases start declining.

Six other states, namely Telangana, Assam, Gujarat, Odisha,Rajasthan, and Kerala had reported more than 50,000 cases each so far in that order.

Maharashtra also had the most number of deaths at 21,033 (↑346); followed by Tamil Nadu with over 6,100 deaths; Delhi and Karnataka with more than 4,200 deaths each; Andhra Pradesh, Gujarat, Uttar Pradesh, and West Bengal with more than 2,500 deaths each; Madhya Pradesh with over 1,100 deaths; and Punjab, Rajasthan, Telangana, Jammu & Kashmir, Haryana, Bihar, Odisha, Jharkhand, Assam, Kerala, Uttarakhand, and Chattisgarh with between 921 and 161 deaths each, and so on in that order. 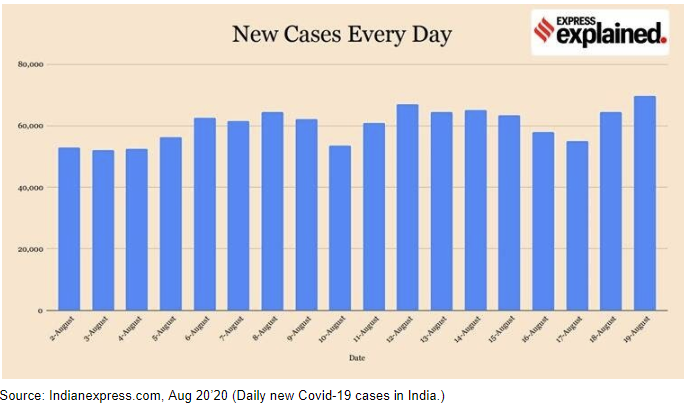 The total number of Covid-19 cases among Tibetans in India, Nepal and Bhutan stood at a total of 94 (↑3) so far, of whom 23 were active, 68 had recovered and two had died, according to the tally of the Central Tibetan Administration as of Aug 20 morning.