(TibetanReview.net, Sep07’20) – With the total of Covid-19 infections in the country exceeding 4.2 million, overtaking Brazil to become the country with the second highest number of cases, and the daily new cases being the highest in the world and continuing to hit new records, the epidemic in India seems to have entered a runaway phase, noted the indianexpress.com Sep 7.

The report cited scientists as saying the epidemic in India was now at a stage where government interventions were unlikely to make any substantial difference in the speed with which new cases were being detected.

Reuters Sep 7 cited experts as saying there was no sign of a peak as cases surged in the world’s second most populous country, both in major cities, such as New Delhi and the financial hub of Mumbai, and rural areas that have limited access to health services.

“It’s becoming a double burden now,” the report quoted Rajib Dasgupta, a professor of community health at the Jawaharlal Nehru University in the capital, as saying. “The urban areas are not slowing down and rural areas are picking up.”

Besides, the latest daily number of new cases, at 90,802, was more than the daily number of those who had recovered, at 69,564, which meant a significant increase in the number of active cases by 21,238.

India is now the country with the world’s second highest number of Covid-19 cases as well as deaths.

Six other states, namely, Rajasthan, Kerala, Haryana, Madhya Pradesh, Punjab, and Jharkhand had reported more than 51,000 cases each so far in that order.

Maharashtra also had the most number of deaths at 26,604 (↑328); followed by Tamil Nadu with over 7,800 deaths; Karnataka with more than 6,300 deaths, Delhi and Andhra Pradesh with over 4,400 deaths each; Uttar Pradesh, West Bengal, and Gujarat with more than 3,100 deaths each; Punjab, Madhya Pradesh, and Rajasthan with over 1,100 deaths each; and Telangana, Haryana, Jammu & Kashmir, Bihar, Odisha, Jharkhand, Chattisgarh, Assam, Kerala, and Uttarakhand, with between 895 and 341 deaths each, and so on in that order. 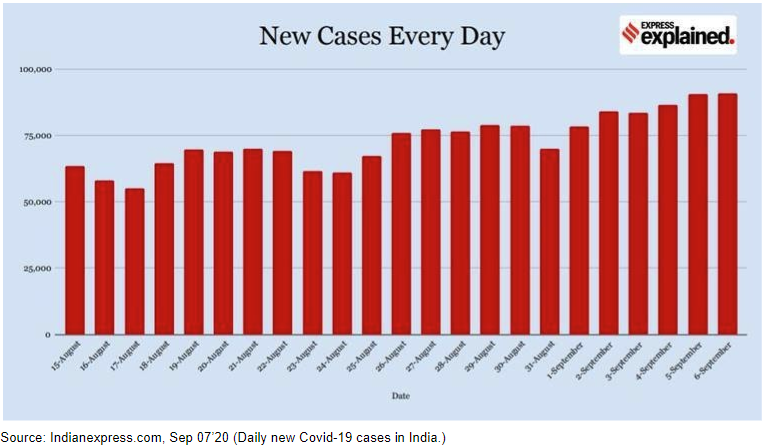 The total number of Covid-19 cases among Tibetans in India, Nepal and Bhutan had increased to 224 (↑2) so far, of whom 129 were active, 90 had recovered and five had died, according to the tally of the Central Tibetan Administration as of Sep 07 morning.