(TibetanReview.net, Sep11’20) – With the number of fresh Covid-19 cases in India, now the highest in the world, hitting a new record almost every other day at over 95,000, it appears to be only a matter of days before it will see 100,000 or more new infections each day.

Besides, the latest daily number of new cases, at 96,551, was more than the daily number of those who had recovered, at 70,880, which meant a substantial increase in the number of active cases by 25,671.

Four states, namely Maharashtra, Andhra Pradesh, Tamil Nadu, and Karnataka have accumulated more than 430,000 cases each in that order.

Eight other states, namely Utttar Pradesh, Delhi, West Bengal, Bihar, Telangana, Odisha, Assam, and Gujarat had reported more than 100,000 cases each so far in that order.

Seven other states, namely, Kerala, Rajasthan, Haryana, Madhya Pradesh, Punjab, Jharkhand, and Chattisgarh, had reported more than 55,000 cases each so far in that order.

Besides, there were 11 other states/Union Territories with a total more than 1,300 cases each, namely, Himachal Pradesh, Manipur, Chandigarh, Arunachal Pradesh, Nagaland, Andaman and Nicobar Islands, Meghalaya, Ladakh, Dadra and Nagar Haveli, Sikkim, and Mizoram in that order. 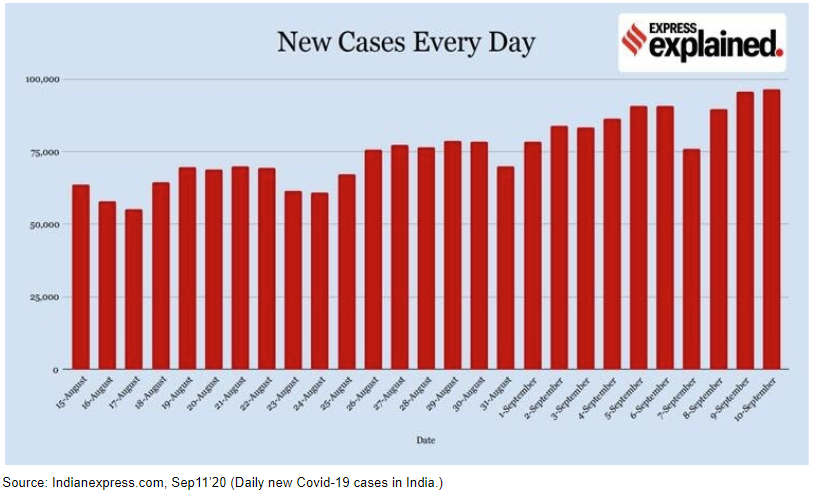 The total number of Covid-19 cases among Tibetans in India, Nepal and Bhutan had increased to 260 (↑3) so far, of whom 152 were active, 102 had recovered and six had died, according to the tally of the Central Tibetan Administration as of Sep 11.