(TibetanReview.net, Aug03’20) – As the number of people with the Covid-19 infection keeps rising steeply across the world, crossing the 18 million mark, with nearly 690,000 deaths as of Aug 3 at 2 PM, the situation in India continues s to be in keeping with this trend. No major state, apart from Delhi, Tamil Nadu and Maharashtra, is showing any signs of reduction in cases right now, noted the indianexpress.com Aug 3.

This is the fifth consecutive day the number of daily new cases in India had increased by more than 50,000.

Besides, there were twelve states and Union Territories with a total more than 1,000 cases each, namely Chattisgarh, Uttarakhand, Goa, Tripura, Puducherry, Manipur, Himachal Pradesh, Nagaland, Arunachal Pradesh, Ladakh, Dadra and Nagar Haveli, and Chandigarh in that order.

Finally, there were four other states/ Union Territories with less than 1,000 cases each, namely Meghalaya, Andaman and Nicobar Islands, Sikkim, and Mizoram (482↑14) in that order.

Maharashtra also had the most number of deaths at 15,576 (↑260), followed by Tamil Nadu, Delhi, Karnataka, Gujarat, Uttar Pradesh, West Bengal, Andhra Pradesh, Madhya Pradesh, Rajasthan, Telangana, Haryana, Punjab, Bihar, Jammu and Kashmir, and so on in that order.

Delhi has been seeing the low new cases on Sundays and this time it was 961 with 15 deaths. Even so, the reason why the national capital is offering so much hope is that it has been seeing a continuous decline in the number of active cases of novel Coronavirus infection for more than a month now. This happens when more number of people are recovering from the disease every day than are falling sick, said the indianexpress.com report.

From a high of about 28,000 active cases at the end of June, the number has declined to just over 10,000, it said. On Aug 3 morning, the government tally show the city’s new cases, at 961, to be less than the number of those who had recovered, at 1,186, the trend it had generally maintained over many weeks. 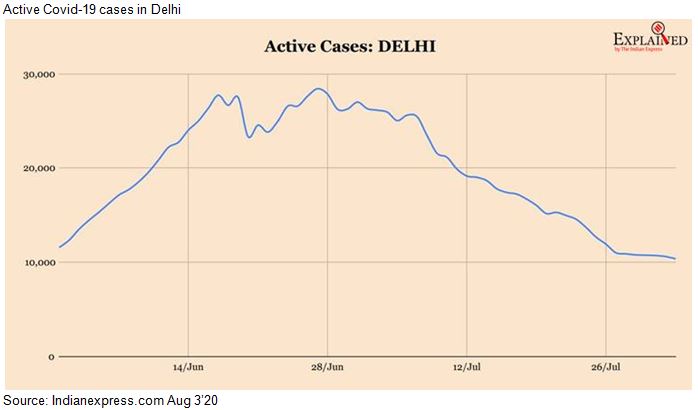 With regard to the situation in the country as a whole, the report noted, however, that India was slowly closing the gap on Brazil, which has the second highest number of infected people in the world after the United States.

Among Tibetans in India and Nepal, there have been a total of 75 (↑3) infections so far, of whom 10 were active, 63 had recovered and two had died, according to the tally of the Central Tibetan Administration as of Aug 3.