(TibetanReview.net, Oct07’20) – For 15 of the last 20 days, the daily recoveries in India from the Covid-19 infection had remained higher than the detection of new cases, a development that had significantly eased the disease burden in the last three weeks, reported the Indianexpress.com Oct 7. It said the number of active cases had dropped by more than 100,000 in the last three weeks.

The slowdown was stated to be evident in almost all states, except Kerala, Karnataka and Chhattisgarh, the three states with the fastest growing case numbers right now. The report said Karnataka and Kerala had contributed the maximum number of cases in the last one week, after Maharashtra.

Also, the average daily positivity rate had dropped over the last three weeks (week on week) to 6.8% during Sep 30-Oct 6 from 9.2% during Sep 16-22, mainly driven by a decline in average daily new cases even as testing increased, reported the timesofindia.com Oct 7.

Four states, namely Maharashtra, Andhra Pradesh, Karnataka, and Tamil Nadu have accumulated more than 630,000 cases each in that order.

Three other states/ Union Territories, namely Jharkhand, Jammu & Kashmir, and Uttarakhand had reported more than 52,000 cases each so far in that order. 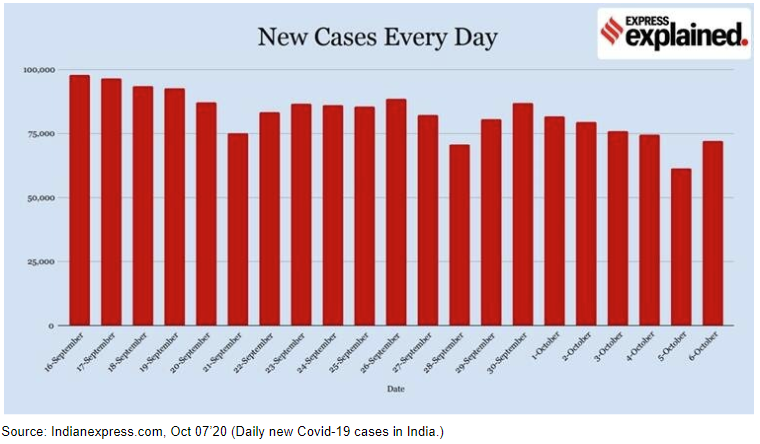 The total number of Covid-19 cases among Tibetans in India, Nepal and Bhutan had remained unchanged at 403 (↑0), of whom 175 were active, 214 had recovered and 14 (↑0) had died, according to the tally of the Central Tibetan Administration (CTA) as of Oct 07.

The Voice of Tibet (vot.org) radio broadcast service reported Oct 6 that 95 monks of Drepung Loseling Monastery in the Mundgod Tibetan settlement, Karnataka state, had tested positive for covid-19. It was not clear whether the CTA figures included this number.