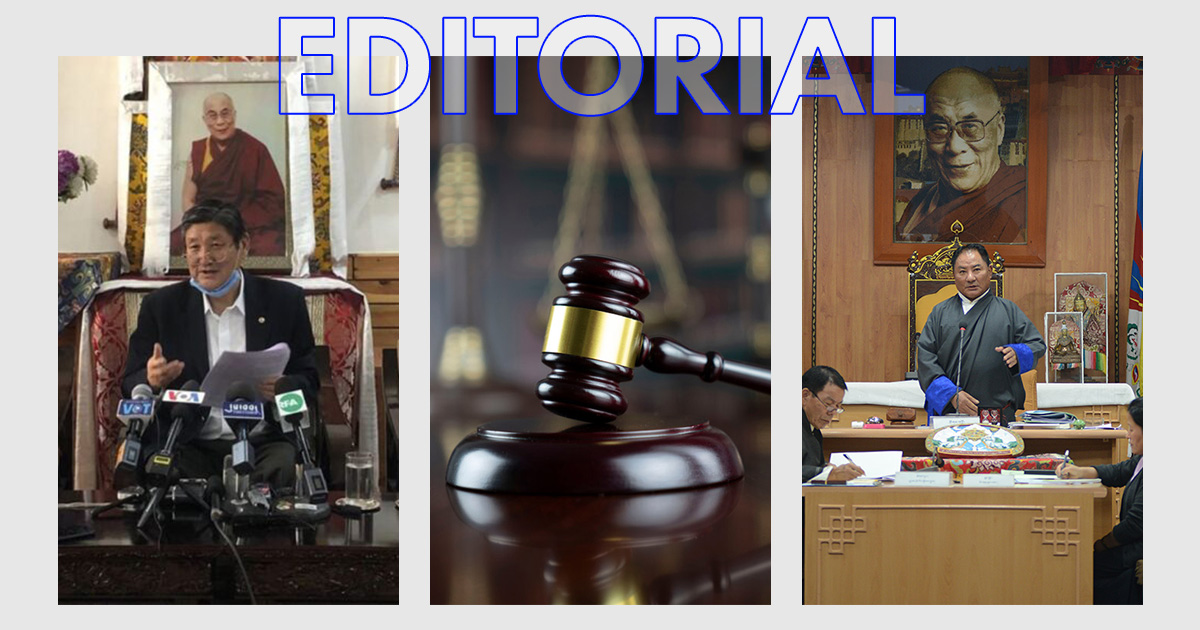 The sorry episode of Mar 25 in which the Tibetan Parliament in Exile (TPiE) summarily packed off the entire panel of justice commissioners of the Tibetan Supreme Justice Commission (TSJC) means that no self-respecting person would want to become a justice commissioner on that august body which is supposed to be one of the three pillars of Tibetan democracy unless two serious shortcomings in the current situation are fully addressed at once.

The first serious shortcoming is that the dismissal shows that the TPiE could get rid of any or all justice commissioners of the TSJC on almost any ground it likes. It only needs to whip up a two-thirds majority of votes, which it has proved could easily be mustered if executed in the “right” way. The question is, what does this make of the position of a justice commissioner of the TSJC, and of the status of the TSJC vis-a-visa the TPiE? It certainly does not make the judiciary a coequal pillar of Tibetan democracy. Nor does it make the position of a justice commissioner one of dignity, authority and respect of any great level.

The second serious shortcoming in the current situation is that the TPiE does not need to bother about the legality of its dismissal actions since it is accountable to no one and there is no authority to hear any appeal against any allegation of glaringly wrong or illegal actions taken by it, especially once it gets rid of the entire panel of justice commissioners of the TSJC. In other words, it can play with the charter as it likes, citing any number of irrelevant provisions in it to carry out a dismissal just to give a superficial legal veneer to its actions.

The easy solution to the first problem is to lay down the grounds on which a dismissal could be carried out. This will not only lend dignity to the office of a justice commissioner but it is also what the rule of law – to which our honourable leaders pay so much lip service – requires.

In the United States, the constitution provides that as with other government officials, federal judges may be removed from office following impeachment and conviction for “Treason, Bribery, or other high Crimes and Misdemeanors”. Besides, judges “hold their Offices during good Behaviour.”

In India too, a judge of the Supreme Court may be removed on the ground of “proved misbehaviour or incapacity.”

In both the countries, judges cannot be removed from office for merely doing their duty, even if their decisions are questionable, as they often are, unless their purported discharge thereof are proved to fall within the ambit of the stated grounds for their impeachment or removal, as the case may be.

Specifying the grounds for removal is also an important requirement from the point of view of rule of law. The first requirement of rule of law is that there should be certainty about what the law is and what exactly constitutes violations thereof. In its absence, our laws will be no different from those of the People’s Republic of China which designedly gives unfettered power to the party-state government machinery to enable it to declare any innocuous action of a citizen it does not like a crime. Hence empowering the TPiE to remove the justice commissioners of the TSJC in the absence of statutorily enshrined grounds on which the removal could be carried out is to grant it arbitrary power. This is the very antithesis of rule of law. It is also, no doubt, a show of contempt to the dignity of the office of a justice commissioner. And there is no good reason why grounds for removal could not be prescribed by law.

The second requirement of rule of law is due process, meaning that the procedure must be fair and reasonable. Summary dismissal of justice commissioners without giving any sort of hearing to the affected parties in a fair proceeding is manifestly arbitrary.

The third requirement of rule of law is that the punishment must be commensurate with the gravity of the offence. Subjecting the justice commissioners to the humiliation of a summary dismissal for nothing more than doing their duty is not fair by any standard of dispensation of justice.

The solution to the second shortcoming in the current situation lies in ensuring that the TPiE’s dismissal move is carried out in conformity with the provisions of the Charter and the rules framed thereunder.

During the Mar 25 move, those who introduced the resolution got away with it because no one – not even the members who voted against the dismissal – appeared to have looked up the relevant provisions of the Charter. That is why no one pointed out that a committee to investigate the veracity or legality of the allegations had not been constituted before the resolution for dismissal was introduced. Indeed, no report was presented when the dismissal was put to vote after a briefest of discussion. Whether this would have mattered is, however, another matter. After all, even the Articles of the Charter cited as the bases for carrying out the dismissals were nothing short of a fantasy.

More significantly, the justice commissioners too did not seem to have read the dismissal provisions of the Charter. If they did, they would have found out that their dismissal was totally unconstitutional and had no legal effect on them whatsoever. They only needed to state this reason for staying put and watch what the TPiE does next.

Or, if they wished to be sagacious, they could have decided to step aside rather than stepping down, as the TPiE then moves to make out what mess it is in as a result of it. However, all this is in the domain of hindsight wisdom now.

But the big question still remains, for the TPiE is still a law unto itself, as matters now stand, lacking both accountability and supervision, or any internal check system, for that matter. Any influential section of it can take advantage of the ignorance of the other members, or the hopeless lack of numerical strength on the opposing side to barrel through any legislative and other move it likes, legal or illegal.

Since the TPiE has shown by the starkness of its Mar 25 action that it cannot be trusted to work under the Charter and its rules, rather than over them, it must be subjected to the judicial oversight of the TSJC for the constitutionality of its actions IN MATTERS OTHER THAN THOSE CURRENTLY EXCEPTED BY THE CHARTER.

In this connection, it is worth noting that the principle of suo moto judicial action is uniquely meant to address the kind of situation that was presented by the Standing Committee of the TPiE’s decision to cancel the Sep 2020 parliament session. This jurisdiction is brought into play when a violation of law is manifest and the need to address it is obvious but the matter cannot come before court due to some procedural obstacle, such as the absence of, or dispute about, a party taking it up, or the incapacity or haplessness of the affected party, and the like.

Unless these fundamental issues are addressed, there will be nothing yang-dhag-pa (perfect) about our mangtso (democracy) when the TPiE is free to treat the judicial guardians of our Charter in such a gruff manner and there is no one to stop it from vandalizing our supposedly democratic Charter.

Dalai Lama reaffirms the sanctity of the Charter, asks elected Tibetan parliament candidates to take oath under it