(TibetanReview.net, Mar07’20) – Deputy speaker Acharya Yeshi Phuntsok of the Tibetan Parliament-in-exile (TPIE) has said Mar 6 that he too is in the race for election as the Sikyong (President), the top elective post in the Central Tibetan Administration (CTA) of the Tibetans in exile. The election is due, alongside that for the TPiE, next year.

Speaking to the Oslo-based Voice of Tibet broadcast service Mar 6, Acharya Yeshi Phuntsok has said he was responding to calls from his supporters and their move to put up his name on social media as a desirable candidate for election to the post. 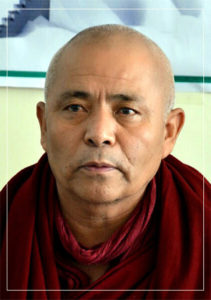 Acharya Yeshi Phuntsok is a familiar face in exile Tibetan leadership’s meetings especially with Indian leaders at both national and local levels, as well as in both political and other fields.

He has been a member of the TPiE since 2006, becoming its Deputy Speaker in the current five-year term which began in 2106.

He previously held administrative and teaching posts at the Central University for Tibetan Studies in Sarnath, Varanasi, and at TCV school Suja, besides having held elective posts at different times as Joint Secretary, Secretary and President of the National Democratic Party of Tibet from 1994 to 2002.

The exile Tibetan election system does not provide for the Election Commission to finalize any list of candidates for the preliminary polls. Rather, anyone can vote for any eligible candidate. Announcing candidature enables voters to know people who are interested to stand for the elections, rather than voting for those who may not be interested.

Two former CTA Kalons (ministers), Ms Gyari Dolma and Mr Lobsang Nyandak, previously announced that they were in the race for election to the Sikyong post.