(TibetanReview.net, Oct08’19) – India was reported to be concerned that China and Bhutan were close to striking a deal on the Doklam boundary dispute with the involvement of a third country, given the fact that it could have implications for its own territorial security. In 2017 India intervened to stop China from building a road on a strip of Doklam plateau. The Standoff lasted 74 days before the two sides withdrew by agreeing to maintain the status.

India supports Bhutan’s claim that Doklam plateau is an undisputed part of its territory. But China considers it as an extension of Chumbi valley of occupied Tibet, the wedge of vital strategic land that lies between its state of Sikkim and Bhutan. The plateau is approximately 89 square km, with a width of less than 10 km. 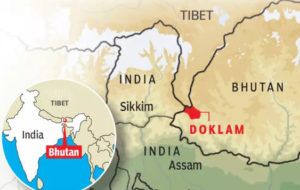 Under the deal, The Chinese holding line in the contentious region is likely to become the working boundary between the two sides, which would not be in keeping with India’s security concerns, said theprint.in Oct 7.

This means China will be successful in its “salami slicing” of Doklam, since it will hold on to the territory it has already captured from Bhutan, the report said.

Referring to developments leading up to the 2017 Doklam standoff, the report said that over the years, China had captured small pieces of territory in Doklam and had started building a road. In 2017, it started constructing a road headed to the strategically important Jampheri ridge-line.

“We had to step in and stop it because this road would have given the People’s Liberation Army easy access and clear line of sight to the Siliguri Corridor,” the report quoted an unnamed Indian official as saying. The Siliguri Corridor, colloquially known as the ‘chicken neck’, is a narrow tract of land that connects the entire Northeast to the rest of India.

As a result, on Jun 18, 2017, several companies of the Indian Army stepped in to form a human wall to prevent Chinese earth excavators and workers from carrying out construction activities. The stand-off lasted for over two months, during which China issued repeated threats of war to teach India a lesson while refusing to hold any official talk, greatly increasing regional tension. The development was closely monitored by global powers.

It finally ended with China reportedly agreeing to not construct the road and moving back by 200 metres while officially denying having made any concession. India also moved back to the Dokala Post that it had maintained for the last several years. This is the holding line that could now become the working boundary, the report said.

The report cited Indian officials as hoping the two neighbouring countries that are in discussions with a third country would take into account India’s concerns.