(TibetanReview.net, Sep02’20) – After a sharp fall on Sep 1, which has been something of a routine on Mondays due to less number of testing the day before, fresh Covid-19 cases in India again crossed 80,000 on Sep 2 morning, registering the second highest daily count so far. The number of deaths recorded in the country too rose beyond 1,000 after a gap of three days, noted the timesofindia.com Sep 2. The timesofindia.com compiles its own data based on government sources.

However, the latest daily number of new cases, at 78,357, was more than the daily number of those who had recovered, at 62,026, which meant a significant increase in the number of active cases by 16,331.

Six other states, namely Gujarat, Rajasthan, Kerala, Haryana, Madhya Pradesh, and Punjab had reported more than 55,000 cases each so far in that order.

Maharashtra also had the most number of deaths at 24,903 (↑320); followed by Tamil Nadu with over 7,400 deaths; Karnataka with more than 5,800 deaths. Delhi and Andhra Pradesh with over 4,000 deaths; Uttar Pradesh, West Bengal, and Gujarat with more than 3,000 deaths each; Punjab, Madhya Pradesh, and Rajasthan with over 1,000 deaths each; and Telangana, Jammu & Kashmir, Haryana, Bihar, Odisha, Jharkhand, Assam, Kerala, Chattisgarh, and Uttarakhand, with between 846 and 280 deaths each, and so on in that order. 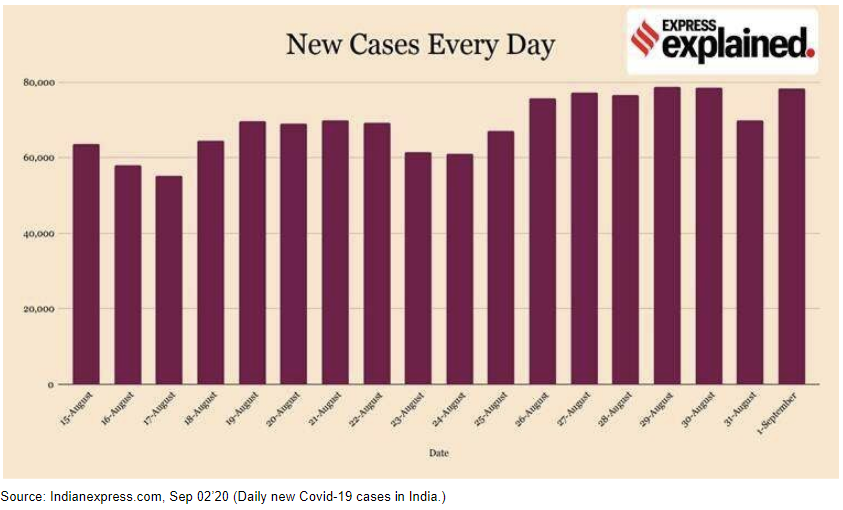 The total number of Covid-19 cases among Tibetans in India, Nepal and Bhutan had increased to 144 (↑5) so far, of whom 54 were active, 87 had recovered and three had died, according to the tally of the Central Tibetan Administration as of Sep 02 evening.