(TibetanReview.net, Sep03’20) – With more than 83,000 new cases, India recorded its biggest single-day surge in Covid-19 infections on Sep 3 morning. This is the third time the country crossed the 80,000-mark, with the three peaks coming in the last four days alone, pointing at the rapid spread of the disease, noted the ndtv.com Sep 3.

No other country in the world has come anywhere close to the 83,000-mark in a day. The US had previously set a record in daily infections by reporting 77,255 cases on Jul 16 as per Johns Hopkins University figures — a grim milestone which India crossed on Aug 29 with 78,903 fresh cases, the report noted.

However, the latest daily number of new cases, at 83,883, was more than the daily number of those who had recovered, at 68,584, which meant a significant increase in the number of active cases by 15,299.

Six other states, namely Gujarat, Rajasthan, Kerala, Haryana, Madhya Pradesh, and Punjab had reported more than 56,000 cases each so far in that order.

Maharashtra also had the most number of deaths at 25,195 (↑292); followed by Tamil Nadu with over 7,500 deaths; Karnataka with more than 5,900 deaths. Delhi and Andhra Pradesh with over 4,100 deaths each; Uttar Pradesh, West Bengal, and Gujarat with more than 3,000 deaths each; Punjab, Madhya Pradesh, and Rajasthan with over 1,000 deaths each; and Telangana, Jammu & Kashmir, Haryana, Bihar, Odisha, Jharkhand, Assam, Kerala, Chattisgarh, and Uttarakhand, with between 856 and 291 deaths each, and so on in that order. 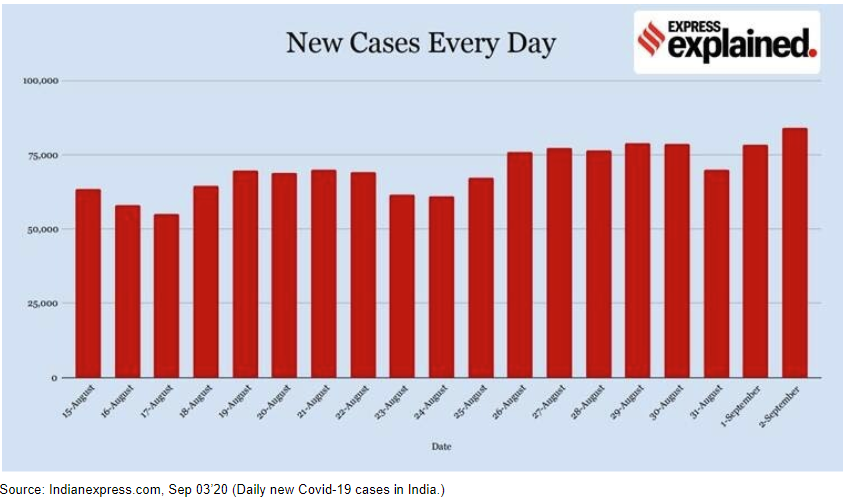 The total number of Covid-19 cases among Tibetans in India, Nepal and Bhutan had increased to 145 (↑1) so far, of whom 55 were active, 87 had recovered and three had died, according to the tally of the Central Tibetan Administration as of Sep 03 morning.