Also, India’s Covid-19 death toll surged to the third highest in the world after overtaking Mexico on Aug 28 even as the pandemic numbers continued to swell in the country with the daily count of fresh cases staying above 76,000 for third day running and fatalities over 1,000 for the fourth straight day, reported the timesofindia.com Aug 29.

However, the latest daily number of new cases, at 76,472, was more than the daily number of those who had recovered, at 65,050, which meant a significant increase in the number of active cases by 11,422.

Besides being the country with the third highest total number of infections, standing behind the USA and Brazil, India also has the fourth highest number of covid-19 deaths. Only the USA, Brazil, and Mexico have reported more deaths than India. While this is according to the Johns Hopkins University data, timesofindia.com, which relies on Indian government data, has noted that the country already had the word’s third highest number of Covid-19 deaths.

Six other states, namely Odisha, Gujarat,Rajasthan, Kerala, Haryana and Madhya Pradesh had reported more than 59,000 cases each so far in that order.

Besides, there were 11 other states/Union Territories with a total more than 1,000 cases each, namely, Manipur, Himachal Pradesh, Nagaland, Arunachal Pradesh, Chandigarh, Andaman and Nicobar Islands, Ladakh, Dadra and Nagar Haveli, Meghalaya, Sikkim, and Mizoram in that order. 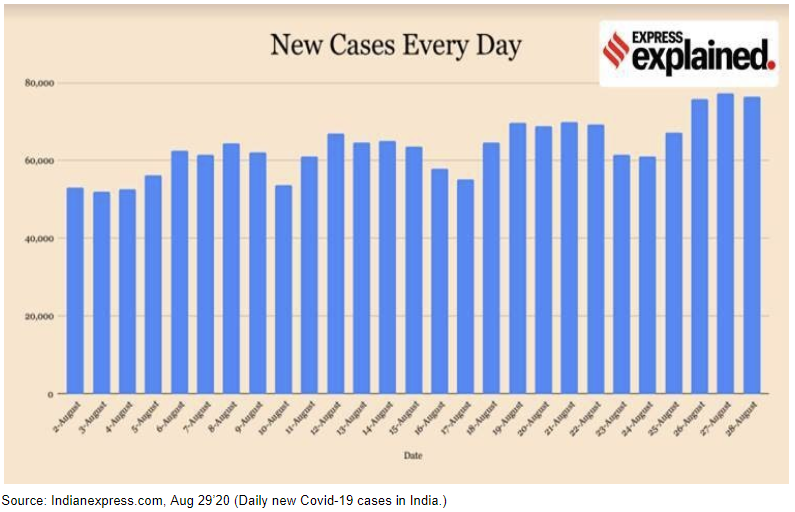 The total number of Covid-19 cases among Tibetans in India, Nepal and Bhutan had risen to 138 (↑3) so far, of whom 55 were active, 80 had recovered and three had died, according to the tally of the Central Tibetan Administration as of Aug 29 morning.