(TibetanReview.net, Sep04’20) – India is the only one among the 20 worst Covid-19-hit countries yet to reach a peak in the number of infections, even as its daily cases continue to hit new world records of more than 83,000 cases, reported the timesofindia.com Sep 4.

All the countries that have reported over 5 lakh cases have significantly reduced cases in recent times. For instance, the average of cases in the past three days in the US was less than half the country’s peak cases. In Brazil, the current level is less than two-thirds of the peak. In India, however, it was 92.3% of the peak of 83,883 cases, which was itself reported on Sep 3, the report noted.

Among countries with the maximum number of cases, the US saw its peak 40 days back, Brazil 35 days and Russia 47 days ago. In the case of Peru and Colombia, the peak was over a fortnight ago. There is no certainly, however, when India may reach its peak.

However, the latest daily number of new cases, at 83,341, was more than the daily number of those who had recovered, at 66,659, which meant a significant increase in the number of active cases by 16,682.

Five other states, namely, Rajasthan, Kerala, Haryana, Madhya Pradesh, and Punjab had reported more than 58,000 cases each so far in that order. 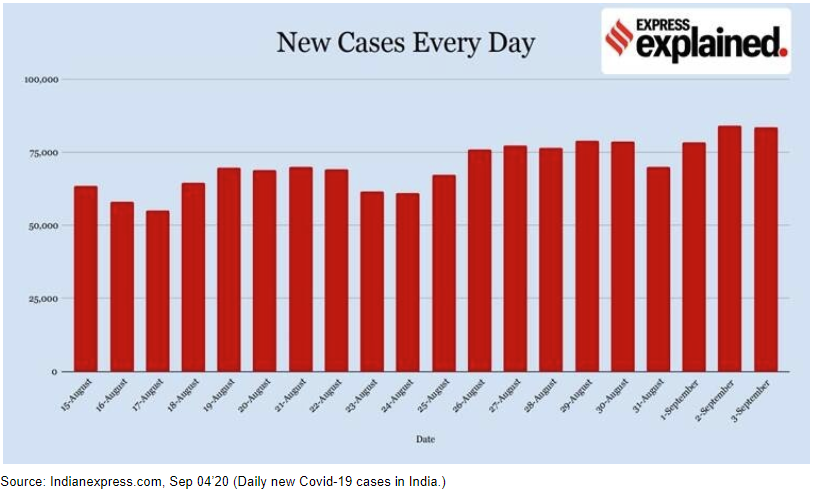 The total number of Covid-19 cases among Tibetans in India, Nepal and Bhutan had increased to 147 (↑2) so far, of whom 53 were active, 89 had recovered and five had died, according to the tally of the Central Tibetan Administration as of Sep 04 morning.