(TibetanReview.net, May04’20) – For the fourth successive day, India reported the highest ever number of new Covid-19 cases on May 3, with the government saying, however, that the growth rate had kept decreasing. There had been 2,553 new cases and 72 deaths during the past 24 hours as of May at 8AM (GMT+5:30), taking their totals to 42,533 infections and 1,373 deaths, according to the tally of India’s Ministry of Health. India is now the country with the 15th highest cumulative number of Covid-19 cases.

A quarter of the total number of active cases (29,453) was detected in past three days, reported the timesofindia.com May 4.

Also, 72 per cent of the deaths from the China-originated pandemic infection had occurred in just 20 districts, indianexpress.com My 4 cite the country’s Cabinet Secretary as having told state chief secretaries during a Mar 3 meeting chaired by him. These included Mumbai, Ahmedabad, Delhi, Chennai and Pune.

Meanwhile, a study by the Kolkata-based Indian Association for the Cultivation of Science (IACS) showed that the Covid-19 infection may peak in late June nationally, with the highest number of infection reaching over 150,000, said another timesofindia.com report May 4, going by the trend of the model’s curve and effective reproduction number at 2.2. This means 220 people being infected by 100 others.

The peak itself could be halved with increased testing and stringent lockdowns in targeted zones, IACS was cited a saying, based on a “bio-computational modelling” study.

A Singapore University of Technology and Design predicted a week ago through mathematical modeling that Covid-19 will end 97 per cent in India around May 21.

Whatever may be the case, as per the Ministry of Health’s latest tally, a total of 11,707 had recovered and 29,453 cases still remained active in India as of May 4 morning.

Besides, Puducherry (8), Goa (7), Manipur (2), Mizoram (1), and Arunachal Pradesh (1) and had reported cases. One case in Nagaland was transferred to Assam. 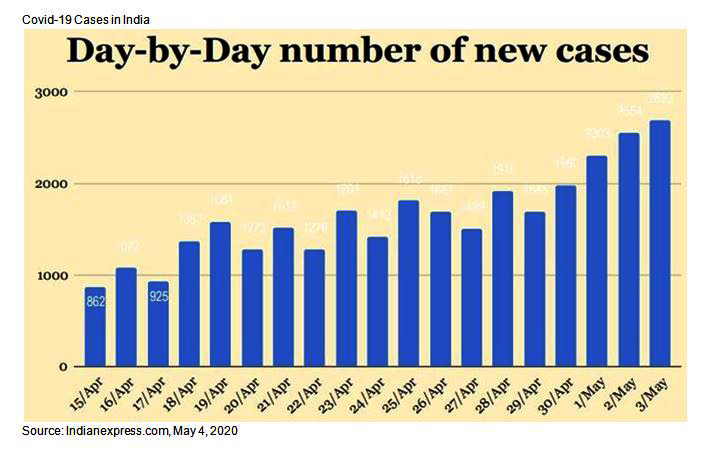 In Delhi, the number of containment zones came down to 94 with the de-sealing of seven of them, including two on May 3. This meant no new case had emerged in those areas in the past 28 days.

Ruing that Delhi’s economy was in doldrums, revenue collection at rock bottom and there was almost no money to pay salaries to government staffers, Chief Minister Arvind Kejriwal on May 3 said it was time to relax the lockdown in the city, reported timesofindia.com May 4. He appealed to the Centre to let the containment zones remain sealed and make the rest of the city — now fully a ‘red zone’ — a ‘green zone’ and allow markets to reopen from May 4.

Under the central government’s rule, zones are labeled district-wise while containment zone are small residential units or street areas within a district where Covid-19 cases had been detected.

While Kejriwal has submitted his limited-red-zoning proposal to the central government, India’s Health Minister has already expressed his disagreement.

“Delhi is one of the places where we are considering the current status. More stringent actions need to be taken. I think that minimum relaxations should be given by Delhi Govt amid coronavirus lockdown to curb the spread of Covid-19,” timesofindia.com May 4 quoted health minister Harsh Vardhan as saying.