(TibetanReview.net, May02’20) – As India declared on May 1 a two-week extension of a nationwide lockdown which was otherwise to end on May 3, the country has reported its highest ever 24-hour increase in Covid-19 cases, with another high fatality figure, on May 2 morning. There were 2,293 new cases and 71 deaths in the last 24 hours as of May 2 at 8 AM (GMT+5:30), reported the country’s Ministry of Health and Family Welfare. The total number of cases in the country stood at 37,336, the 16th highest in the world, and the number of deaths at 1,218. 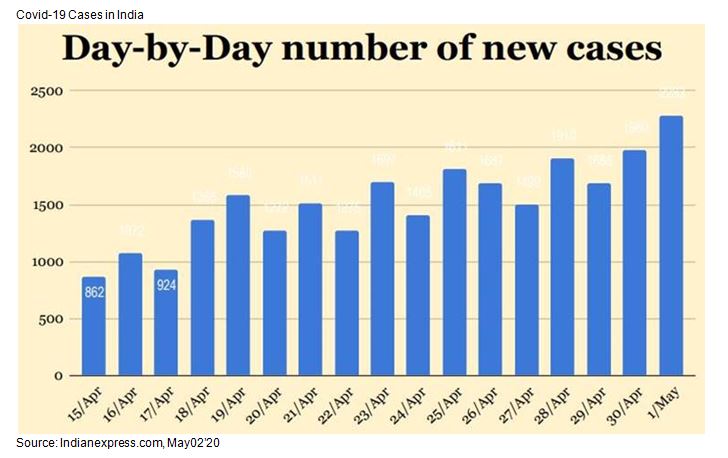 India has formulated a new list that classifies all the 733 districts across the country as Green, Red or Orange Zones for the purpose of implementing relaxations in its Covid-19 containment strategy while enforcing the third phase of the lockdown, which will end after May 17.

Districts with zero confirmed cases so far and those with no confirmed cases in the last 21 days are labeled as Green Zones. There are 319 such zones, including most of the districts in northeastern states. They enjoy the maximum amount of relaxation from the nationwide lockdown restrictions.

Red Zone districts are defined by taking into account the total number of active cases, the doubling rate of confirmed cases, extent of testing and surveillance feedback from districts. There are 130 such zones presently. All major metro cities such as Delhi, Mumbai, Chennai, Kolkata, Hyderabad, Bengaluru and Ahmedabad are in Red Zones, subjected to maximum restrictions. However, Relaxations have been given even in such districts during the third phase of the lockdown.

Districts which are neither Green nor Red Zone are labeled as Orange Zones. There are 284 such zones.

In addition, there are containment areas and buffer zones in the identified red and orange zone districts which are required to be notified by the concerned local administrations.

However, whatever may be the zone label, certain major restrictions will continue across the nation. These include ban on domestic and international air travel of passengers; passenger movement of trains and interstate bus for public transport; metro rails, schools, colleges, and educational institutes; and so on, subject to government approval in certain of the above cases.

Under the new classification, none of the districts in Delhi comes close to being classified green — a district that has had no reported case for 21 consecutive days, reported timesofindia.com May 2.

“We are studying the revised order of the ministry of home affairs (MHA). Since all 11 districts of Delhi have been categorised as red, we have very limited scope to permit any relaxation. We will come out with a detailed plan for the city by Saturday (May 2) or Sunday,” timesofindia.com May 2 quoted as a senior Delhi official as saying.

State governments can tighten, but not relax restrictions declared by the central government.

Himachal Pradesh, which had 41 cumulative cases, has not reported any fresh case in the past eight days. Kangra is one of nine in the state’s 12 districts which are now novel coronavirus-free.

The state currently has three active cases from Una and one each from Chamba and Sirmaur undergoing treatment in different hospitals.