(TibetanReview.net, Sep12’20) – For the third consecutive day India has reported a record number of daily Covid-19 cases, with the total daily numbers inching towards 100,000. Though India is the country with the second highest total number of cases thus far, its growth in infections is faster than anywhere else in the world, as cases surge through urban and rural areas.

Government officials and experts said the unabated rise in cases in Maharashtra and other parts of the country were likely a result of economic activity re-starting, local festivals and lockdown fatigue, noted Reuters Sep 12.

Besides, the latest daily number of new cases, at 97,570, was more than the daily number of those who had recovered, at 81,533, which meant a substantial increase in the number of active cases by 16,037.

Four states, namely Maharashtra, Andhra Pradesh, Tamil Nadu, and Karnataka have accumulated more than 440,000 cases each in that order.

Seven other states, namely Rajasthan, Haryana, Madhya Pradesh, Punjab, Jharkhand, Chattisgarh, and Jammu & Kashmir had reported more than 50,000 cases each so far in that order.

Four more states/Union Territories, namely Uttarakhand, Goa, Puducherry, and Tripura, had reported more than 18,000 cases each in that order.

Besides, there were 11 other states/Union Territories with a total more than 1,300 cases each, namely, Himachal Pradesh, Manipur, Chandigarh, Arunachal Pradesh, Nagaland, Andaman and Nicobar Islands, Meghalaya, Ladakh, Dadra and Nagar Haveli, Sikkim, and Mizoram in that order. 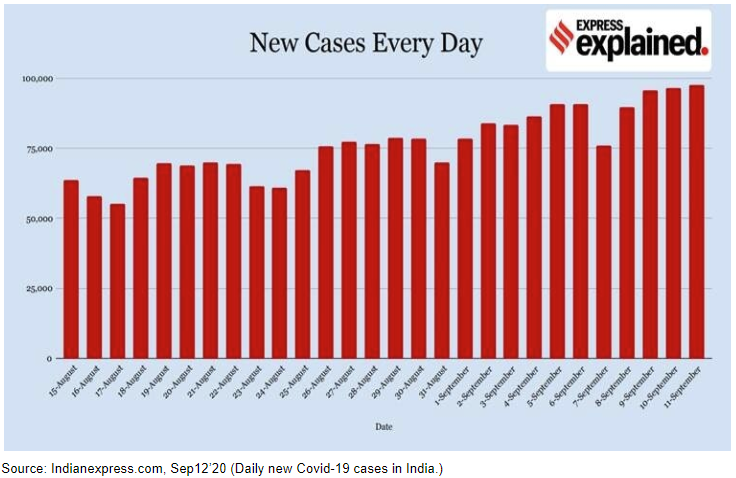 The total number of Covid-19 cases among Tibetans in India, Nepal and Bhutan had increased to 261 (↑1), of whom 153 were active, 102 had recovered and six had died, according to the tally of the Central Tibetan Administration as of Sep 12.