(TibetanReview.net, Oct13’20) – India recorded its lowest Covid-19 cases in 63 days and the lowest casualties in 77 days as the dip from the peak levels of the disease in September has continued so far, reported the timesofindia.com Oct 13. What is more, the number of fresh cases on Oct 12 was the lowest since Aug 10. Besides, fresh casualties were the lowest since Jul 27, the report added.

The report also said that though the figures on Oct 12 have been lower than other days of the week since the outbreak of the pandemic and the dip has been attributed by experts mainly to fewer testing on Sundays, data from covid19.org showed that nearly a million tests (9,94,851) were conducted across the country on this Sunday (Oct 11). This was marginally higher than 9,89,860 tests the previous Sunday (Oct 4), but far higher than the preceding two Sundays – 7,09,394 on Sep 27 and 7,31,534 on Sep 20.

However, while most states showed a huge dip in fresh cases, the situation continued to be alarming in Karnataka, Kerala and Bengal which are yet to see a slowdown in the spread of the virus, the report noted. In the case of Karnataka, it was the first time any state recorded more cases in a day than Maharashtra, India’s worst hit state, the report noted.

The country has been recording less than 75,000 new infections daily for the fifth consecutive day and fatalities below 1,000 for 10 straight days, reported the tribuneindia.com Oct 13.

Four states, namely Maharashtra, Andhra Pradesh, Karnataka, and Tamil Nadu have accumulated more than 660,000 cases each in that order.

Six other states, namely Uttar Pradesh, Delhi, West Bengal, Kerala, Odisha, and Telangana had more than 210,000 each in that order. 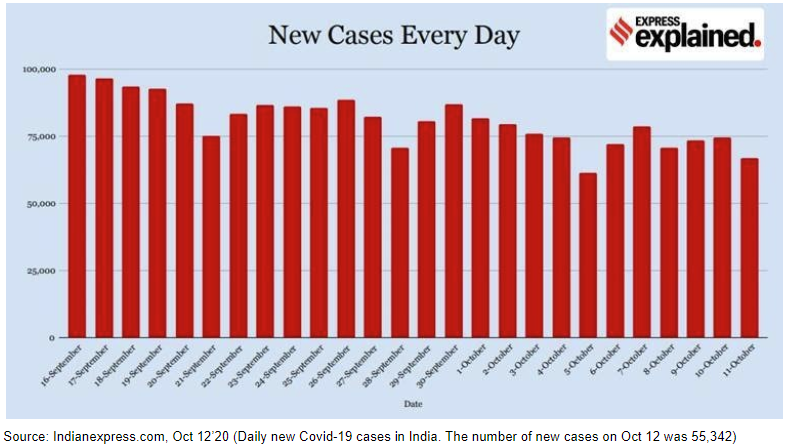 The total number of Covid-19 cases among Tibetans in India, Nepal and Bhutan had increased after remaining unchanged for three days to 567 (↑32), of whom 318 were active, 233 had recovered and 16 (↑1) had died, according to the tally of the Central Tibetan Administration (CTA) as of Oct 13.