(TibetanReview.net, Sep20’20) – For the second successive day India reported more Covid-19 recoveries than new infections albeit only marginally. Besides, the cumulative infections totaled more than 5.4 million and the deaths more than 86,000. If the recent daily new cases did not hit new records, it may be because the nation recorded a sharp drop in testing since Sep 16, noted the timesofindia.com Sep 20.

India’s current positivity rate was stated to be around 8.6%-8.7%, pointing to the need for further ramping up testing to adequately track infections. The report cited experts as saying the positivity rate should be below 5% for testing to be deemed adequate.

Four states, namely Maharashtra, Andhra Pradesh, Tamil Nadu, and Karnataka have accumulated more than 510,000 cases each in that order.

Four other states/ Union Territories, namely Punjab, Chattisgarh, Jharkhand, and Jammu & Kashmir had reported more than 62,000 cases each so far in that order.

Besides, there were 10 other states/Union Territories with a total more than 1,500 cases each, namely, Chandigarh, Manipur, Arunachal Pradesh, Nagaland, Meghalaya, Ladakh, Andaman and Nicobar Islands, Dadra and Nagar Haveli, Sikkim, and Mizoram in that order. 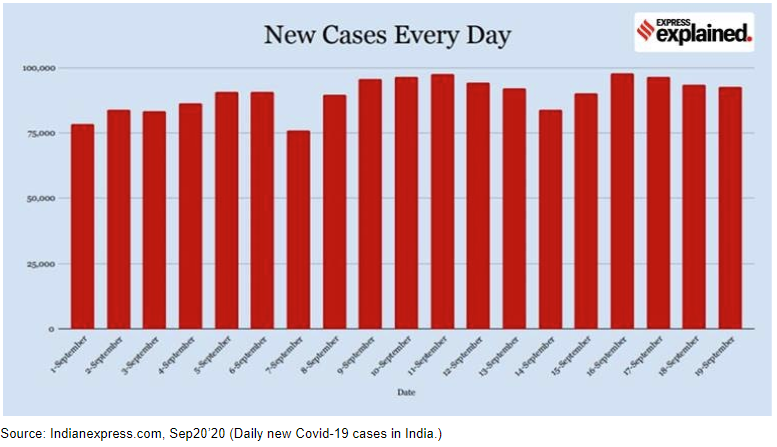 The total number of Covid-19 cases among Tibetans in India, Nepal and Bhutan had remained unchanged for the third day at 291 (↑0), of whom 171 were active, 109 had recovered and 11 had died, according to the tally of the Central Tibetan Administration as of Sep 20.