(TibetanReview.net, Sep06’20) – India reported the world’s highest number of record fresh Covid-19 cases for the fourth straight day on Sep 6 morning. The country also briefly overtook Brazil to become the country with the second highest number of cases after the USA.

Brazil’s numbers may overtake India’s when its final tally for Sep 5 is added. But going by recent trends, India’s caseload is expected to break away from Brazil by Sep 6 to definitely become the country with the second highest total number of cases.

India, currently in the midst of the biggest Covid-19 spike seen in any country since the pandemic’s outbreak, has been recording nearly twice the number of daily cases than Brazil and US over the past few days, noted the timesofindia.com Sep 6.

However, the latest daily number of new cases, at 90,632, was more than the daily number of those who had recovered, at 73,642, which meant a significant increase in the number of active cases by 16,990.

Five other states, namely, Rajasthan, Kerala, Haryana, Madhya Pradesh, and Punjab had reported more than 61,000 cases each so far in that order.

Maharashtra also had the most number of deaths at 26,276 (↑312); followed by Tamil Nadu with over 7,700 deaths; Karnataka with more than 6,200 deaths, Delhi and Andhra Pradesh with over 4,300 deaths each; Uttar Pradesh, West Bengal, and Gujarat with more than 3,000 deaths each; Punjab, Madhya Pradesh, and Rajasthan with over 1,100 deaths each; and Telangana, Haryana, Jammu & Kashmir, Bihar, Odisha, Jharkhand, Chattisgarh, Assam, Kerala, and Uttarakhand, with between 886 and 330 deaths each, and so on in that order. 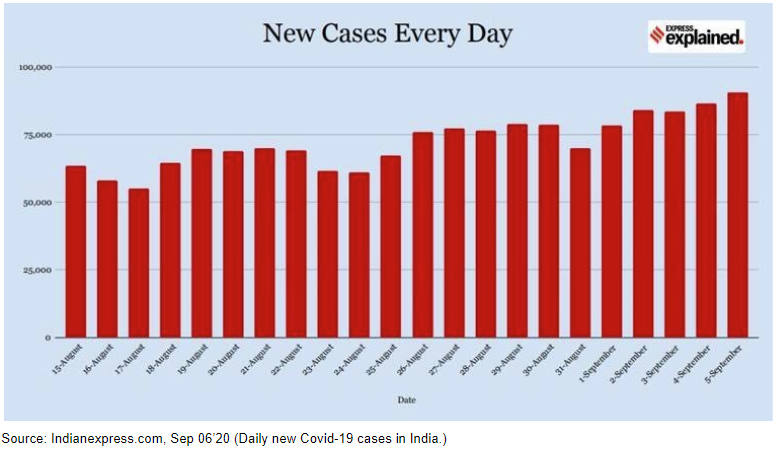