(TibetanReview.net, Oct20’20) – Covid-19 cases across the world crossed 40 million on Oct 19 as the onset of winter in the northern hemisphere fuelled a resurgence in the spread of the disease while there have been over 1.1 million confirmed virus deaths reported to date, noted Reuters Oct 20. It added that the pace of the pandemic was continuing to pick up.

In India, however, the growth rate of infections has more than halved — from 92% in the month prior to Sep 18 when cases peaked to 42% since then, a drop of 50 percentage points – reported the timesofindia.com Oct 20.

At least half of India’s 1.3 billion people are likely to have been infected with the novel coronavirus by Feb 2021, helping to slow the spread of the disease, Reuters Oct 19 cited a member of a federal government committee tasked with providing projections as saying that day.

“Our mathematical model estimates that around 30% of the population is currently infected and it could go up to 50% by February,” the report quoted Manindra Agrawal, a professor at the Indian Institute for Technology in Kanpur and a committee member, as saying.

The continuous decline in the number of new cases has meant that, after two and half months, India has stopped reporting the highest number of cases in the world, noted the indianexpress.com Oct 20. For the last three days, the United States, which is in the midst of a resurgence, has reported more new infections than India. There is a resurgence of cases in several countries of Europe as well, the report noted. 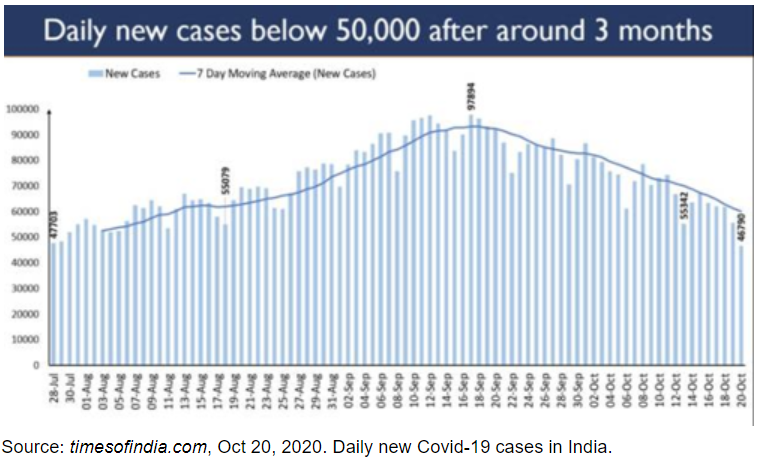