(TibetanReview.net, Aug19’20) – For the first time since May, the overall Covid-19 positivity rate in India has begun to decline, indicating that, out of those being tested, far lesser number of people were being found infected now than earlier, reported the indianexpress.com Aug 19. It noted that after rising steadily for the last three months, the positivity rate reached a peak of 9.01% on Aug 9, after which it began to decline. It has come to 8.72 per cent now, the report added.

The report said the decline in positivity rate was also getting correlated with a relative stagnation in the number of new infections being detected every day.

The report felt that these trends could open up discussion on whether the level of infection in the Indian population had reached a stage from where further transmission of the virus would begin to slow down.

Meanwhile the latest data from India’s Ministry of Health and Family Welfare show that there were 64,531 new cases and 1,092 new deaths in the country in the past 24 hours as of Aug 19 at 8AM, taking their totals to 2,767,273 cases and 52,889 deaths. Both are sharp increases over the previous day’s totals.

Five other states, namely Telangana, Assam, Gujarat, Odisha, and Rajasthan had reported more than 63,000 cases each so far in that order.

Maharashtra also had the most number of deaths at 20,687 (↑422); followed by Tamil Nadu with over 6,000 deaths; Delhi and Karnataka with more than 4,200 deaths each; Gujarat, Andhra Pradesh, Uttar Pradesh, and West Bengal with more than 2,500 deaths each; Madhya Pradesh with over 1,100 deaths; and Rajasthan, Punjab, Telangana, Jammu & Kashmir, Haryana, Bihar, Odisha, Jharkhand, Assam, Kerala, Uttarakhand, and Chattisgarh with between 898 and 158 deaths each, and so on in that order. 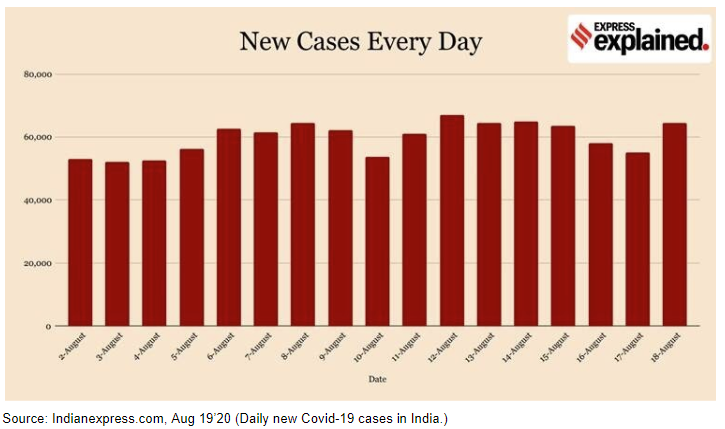 The total number of Covid-19 cases among Tibetans in India, Nepal and Bhutan stood unchanged at a total of 91 (↑1) so far, of whom 21 were active, 68 had recovered and two had died, according to the tally of the Central Tibetan Administration as of Aug 19 morning.