(TibetanReview.net, Aug31’20) – With more than 78,000 new infections in a single day, India’s coronavirus caseload is growing at a faster rate than that of any other country. The US and Brazil have the world’s largest outbreaks over all, but they have been reporting in the range of 40,000 to 50,000 new daily infections in recent days, noted The New York Times Aug 31. On a per capita basis, however, India has had far fewer deaths from the virus than the US and Brazil as well as many other countries, it added.

Nevertheless, for the last four days, India has been detecting more than 75,000 new cases, a figure that no other country has touched, noted the indianexpress.com Aug 31.

The world’s second-most populous country has been posting the highest single-day caseload in the world since Aug 7. At 3.62 million cases, India is fast catching up to the United States and Brazil in terms of total cases but it has a lower death rate, noted Reuters Aug 31.

However, India also now has the world’s third highest number of Covid-19 deaths at more than 64,000, having just overtaken Mexico.

However, the latest daily number of new cases, at 78,512, was more than the daily number of those who had recovered, at 60,868, which meant a significant increase in the number of active cases by 17,644.

India is now the country with the world’ third highest number of Covid-19 cases as well as deaths, having just overtaken Mexico for the number of deaths.

Six other states, namely Gujarat, Rajasthan, Kerala, Haryana, Madhya Pradesh, and Punjab had reported more than 52,000 cases each so far in that order.

Maharashtra also had the most number of deaths at 24,399 (↑296); followed by Tamil Nadu with over 7,231 deaths; Karnataka with more than 5,500 deaths. Delhi with over 4,400 deaths; Andhra Pradesh, Uttar Pradesh, West Bengal, and Gujarat with more than 3,000 deaths each; Punjab, Madhya Pradesh, and Rajasthan with over 1,000 deaths each; and Telangana, Jammu & Kashmir, Haryana, Bihar, Odisha, Jharkhand, Assam, Kerala, Chattisgarh, and Uttarakhand, with between 827 and 257 deaths each, and so on in that order. 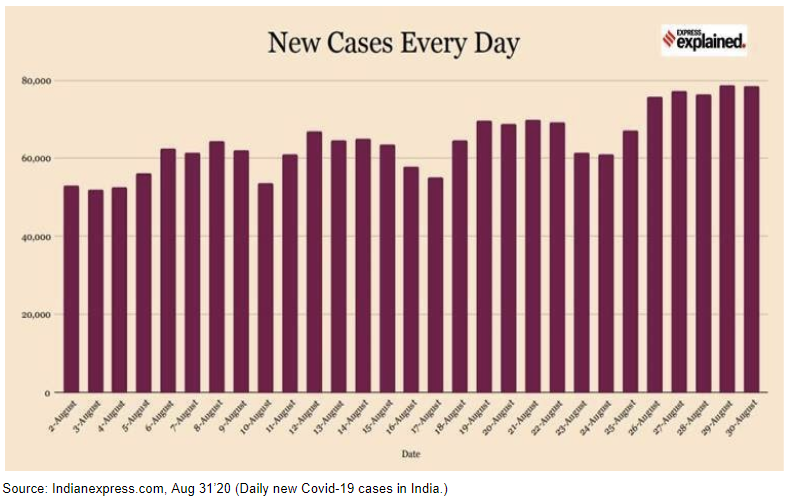 The total number of Covid-19 cases among Tibetans in India, Nepal and Bhutan had remained unchanged at 138 (↑0) so far, of whom 55 were active, 80 had recovered and three had died, according to the tally of the Central Tibetan Administration as of Aug 31 morning.