(TibetanReview.net, Aug13’20) – India has just surged past the UK to become the country with the fourth highest number of Covid-19 deaths while also reporting its highest ever number of daily new cases on Aug 13 morning.

This is the 15th consecutive day the number of daily new cases in India has increased by more than 50,000.

Besides, there are 12 other states/Union Territories with a total more than 1,000 cases each, namely Goa, Tripura, Puducherry, Manipur, Himachal Pradesh, Nagaland, Arunachal Pradesh, Andaman and Nicobar Islands, Ladakh, Chandigarh, Dadra and Nagar Haveli, and Meghalaya in that order.

Finally, there are two other states with less than 1,000 cases each, namely Sikkim and Mizoram (649↑1) in that order. 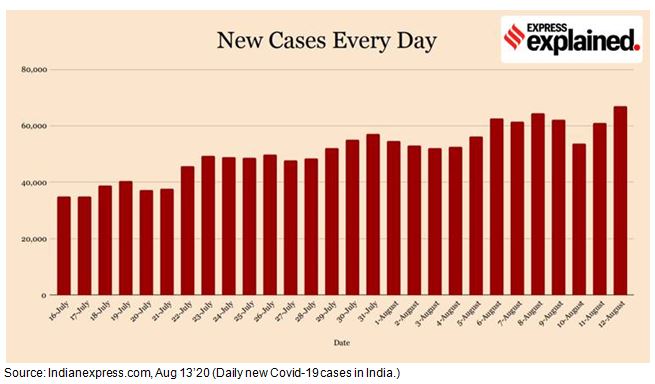 The total number of Covid-19 cases among Tibetans in India, Nepal and Bhutan stood unchanged at a total of 86 (↑0) so far, of whom 18 were active, 66 had recovered and two had died, according to the tally of the Central Tibetan Administration as of Aug 13 morning.