(TibetanReview.net, Aug24’20) – India now has the highest daily new Covid-19 infections as its total number of cases has crossed the 3.1 million mark. However, the situation is seen as improving given the country’s huge population and in terms of its continuously rising rate of recovery and falling rates of active cases and fatality.

However, the latest daily number of new cases, at 61,408, was more than the daily number of those who had recovered, at 57,469, which meant an increase in the number of active cases by 3,939.

Seven other states, namely Assam, Gujarat, Odisha, Rajasthan, Kerala, Haryana and Madhya Pradesh had reported more than 53,000 cases each so far in that order.

Seven other states/Union Territories, namely Punjab, Jammu & Kashmir, Jharkhand, Chattisgarh, Uttarakhand, Goa, and Puducherry had reported more than 10,500 cases each in that order.

Maharashtra also had the most number of deaths at 22,253 (↑258); followed by Tamil Nadu with over 6,500 deaths; Delhi and Karnataka with more than 4,300 deaths each; Andhra Pradesh with more than 3,200 deaths; Uttar Pradesh, Gujarat, and West Bengal with more than 2,700 deaths each; Madhya Pradesh and Punjab with over 1,000 deaths; and Rajasthan, Telangana, Jammu & Kashmir, Haryana, Bihar, Odisha, Jharkhand, Assam, Kerala, Uttarakhand, and Chattisgarh with between 955 and 197 deaths each, and so on in that order. 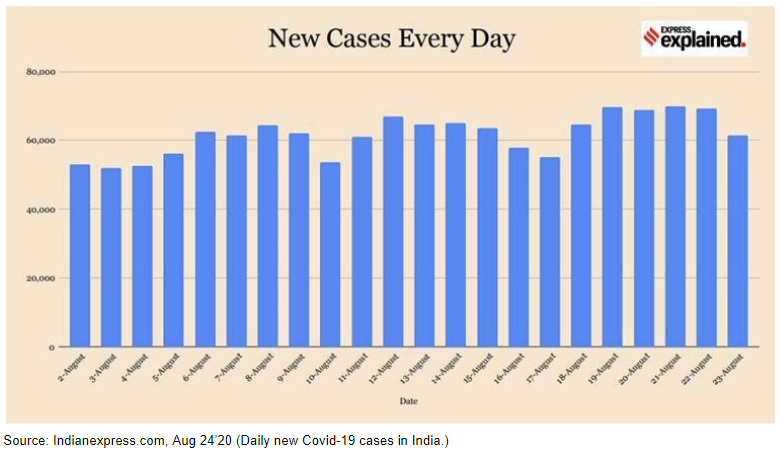 The total number of Covid-19 cases among Tibetans in India, Nepal and Bhutan stood unchanged at a total of 94 (↑0) so far, of whom 14 were active, 77 had recovered and three had died, according to the tally of the Central Tibetan Administration as of Aug 24 morning.