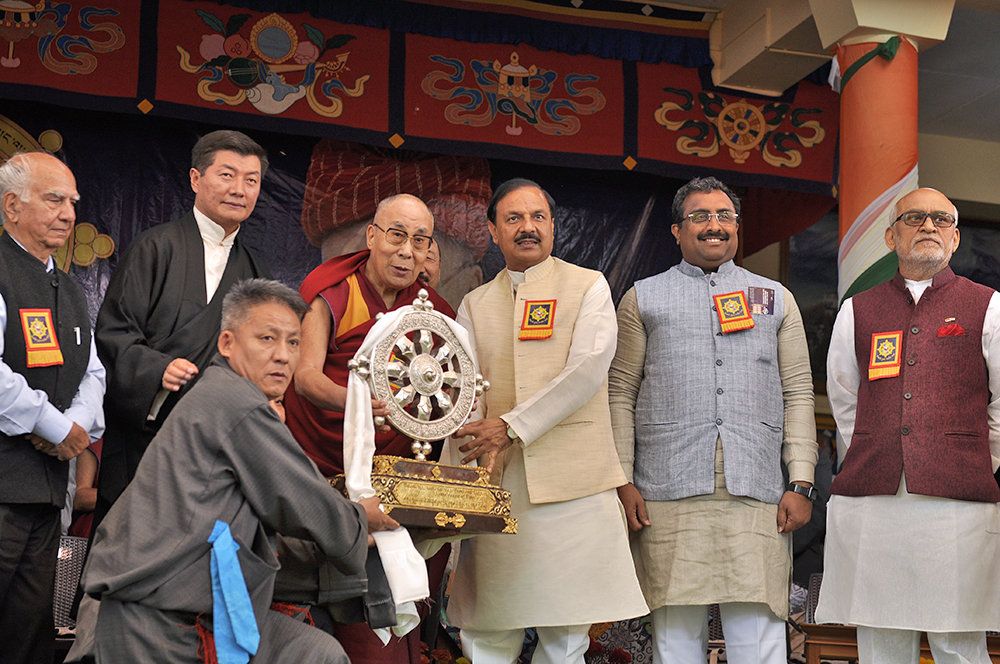 (TibetanReview.net, Apr02, 2018) – In an apparent indication of not having totally surrendered to China on the issue of Tibet and in an obvious reversal of an earlier order, political leaders of India did attend a high profile event organized by the Central Tibetan Administration at Dharamshala, Himachala Pradesh, on Mar 31.

Forced to shift from a national sports complex in capital New Delhi, with senior government leaders being especially asked not to attend the event to avoid the risk of offending China, the ‘Thank You India’ year, marking the start of the Dalai Lama’s 60th year in exile, was launched in a relatively robust event on the small courtyard of the Tsuglakhang, the main Buddhist temple in Dharamshala, Himachal Pradesh. Central and state political leaders did attend the event, perhaps suggesting that the order asking them to excuse themselves was tacitly acknowledged as having gone a bit too far, all the more because some saw it as a snub to a person of the Dalai Lama’s stature and by others as overindulgence towards a geopolitical rival that shows little reciprocal concern towards its interests.

In his rather short remark on the occasion, the Dalai Lama, Tibet’s exiled spiritual leader, told the gathering of around 4,000 people that after nearly 60 years of living in exile, the Tibetan people had a clearer idea of what the future might hold. He referred to the special historical relationship, dating back to ancient times, between India and Tibet. “We regard ourselves as students and Indians as our gurus. We think of India with respect and admiration as the Land of the Noble Ones. There is a strong bond between us.”

He also said: “Our culture in Tibet was based on what we learned from the masters of Nalanda, such as Shantarakshita. Under his guidance we translated the words of the Buddha into the hundred or so volumes of the Kagyur and the exegetical treatises of subsequent Indian masters into the more than two hundred volumes of the Tengyur.”

A Feb 26 directive from India’s top bureaucrat, the Cabinet Secretary, asking senior federal and state political leaders not to attend the event so as not to jeopardize ties with China, stood either ignored or diluted at the event. The chief guest was Mr Mahesh Sharma, India’s junior minister for Culture, Tourism and Civil Aviation, while Mr Ram Madhav, General Secretary of India’s ruling Bharatiya Janata Party, was the Guest of Honour. Also present was Mr Shanta Kumar, the state’s former chief minister and current MP representing the local Kangra District in India’s parliament where he is the Convenor of the All Party Indian Parliamentary Forum for Tibet. Mr Satyavrat Chaturvedi, a Rajya Sabha MP from India’s opposition Congress party, also attended the event. So also Mr RK Khrimey, a former minister in Arunachal Pradesh state, in his capacity as the National Convener of the Core Group for the Tibetan Cause, an umbrella body for Tibet support groups across India. Mr Kishen Kapoor, a State government minister and the local MLA, was also present.

Most of the Speakers, including chief guest Mahesh Sharma and President Lobsang Sangay of the Central Tibetan administration, called for change of heart in Beijing to make it possible for the Dalai Lama to return to his homeland.

Said chief guest Mahesh Sharma: “When it’s issue of relations between India and Tibet, there is no need for a thank you. This is an emotional moment, the word refugee is painful; you are our friends and guests in India. Tibetans have integrated Indian culture as flower and fragrance, thus the word thank you does not hold a meaning. We are committed to protecting and supporting the Tibetan culture. Prime Minister Modi is taking Indian culture and traditional message of peace to the world and Tibetan culture is part of it,” indianexpress.com Mar 31 cited Sharma as saying, adding, “We support the Dalai Lama’s struggle for returning to his country.”

Guest of honour Ram Madhav said the Dalai Lama was not a refugee but a family member. He thanked Jawaharlal Nehru, India’s first Prime Minister, for providing asylum to the Dalai Lama in the country.

He appreciated the Dalai Lama’s contributions to India, referring to Tibet’s preservation of ancient India’s Nalanda and Vikramashila Buddhist scholarship. “Now, you have brought it back to India and we thank you for reminding us of our Buddhist heritage. We regard India as the land of the Buddha, Mahatma Gandhi and His Holiness the Dalai Lama, but appreciate your desire ultimately to see your motherland again.”

Senior BJP leader Shanta Kumar called it a tragedy that the Dalai Lama had to come to India, leaving his country. “But you graced us and made this land pious and made it pilgrimage. Hey God change China’s heart to change its approach to the Dalai Lama,” indianexpress.com Mar 31 quoted him as saying.

Mr Chaturvedi said India fulfilled a sacred duty in welcoming the Dalai Lama, adding, “Therefore, everyone of you is our special guests and a part of our family.”