(TibetanReview.net, Aug28’20) – India, which is now the country with the world’s highest number of daily new Covid-19 cases, reported yet another record new number of infections even as it continued to claim to have better figures than most other countries in terms of the numbers of recoveries and deaths as percentages of totals.

According to the timesofindia.com Aug 28, the total number of infections that have been reported in India so far in August was nearly equal to the number of cases recorded in all previous months put together.

However, the latest daily number of new cases, at 77,266, was more than the daily number of those who had recovered, at 60,177, which meant a significant increase in the number of active cases by 17,089.

Seven other states, namely Assam, Gujarat, Odisha, Rajasthan, Kerala, Haryana and Madhya Pradesh had reported more than 58,000 cases each so far in that order.

Besides, there were 10 other states/Union Territories with a total more than 1,500 cases each, namely, Manipur, Himachal Pradesh, Nagaland, Arunachal Pradesh, Chandigarh, Andaman and Nicobar Islands, Ladakh, Dadra and Nagar Haveli, Meghalaya, and Sikkim in that order. 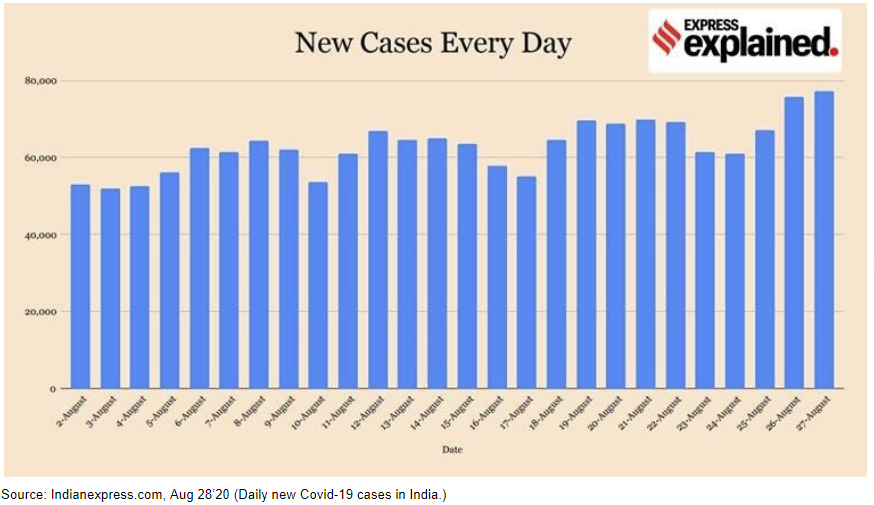 The total number of Covid-19 cases among Tibetans in India, Nepal and Bhutan had risen to 135 (↑0) so far, of whom 55 were active, 77 had recovered and three had died, according to the tally of the Central Tibetan Administration as of Aug 28 morning.