(TibetanReview.net, Aug16’20) – The number of Covid-19 fatality in India has inched close to 50,000 as the country continues to report well over 60,000 new infections each day amid falling fatality and increasing recovery rates and with determination to keeping increasing testing.

India has been reporting over 60,000 cases daily since Aug 7, barring Aug 11 when the country registered 53,601 new infections.

Five other states, namely Telangana, Gujarat, Assam, Rajasthan, and Odisha have reported more than 50,000 cases each so far in that order.

Besides, there are 11 other states/Union Territories with a total more than 1,000 cases each, namely Puducherry, Tripura, Manipur, Himachal Pradesh, Nagaland, Arunachal Pradesh, Andaman and Nicobar Islands, Chandigarh, Ladakh, Dadra and Nagar Haveli, Meghalaya, and Sikkim in that order. 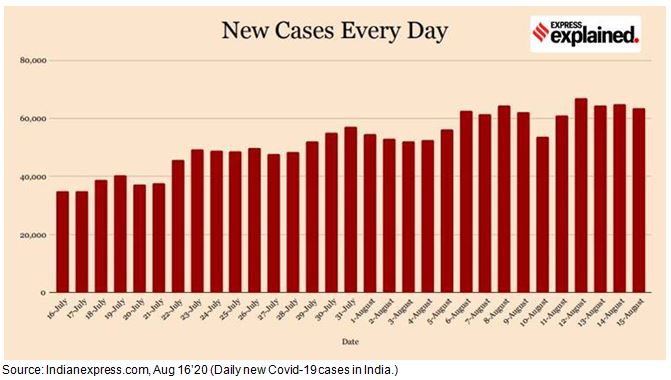 The total number of Covid-19 cases among Tibetans in India, Nepal and Bhutan stood unchanged at a total of 88 (↑0) so far, of whom 20 were active, 66 had recovered and two had died, according to the tally of the Central Tibetan Administration as of Aug 16 morning.