(TibetanReview.net, Aug26’20) – India reported on Aug 25 the highest number of new coronavirus cases globally for the 18th straight day, remaining well ahead of the United States and Brazil, the countries with the highest and second highest number of Covid-19 cases thus far, reported Reuters Aug 25, citing its tally based on official reporting. This has continued for the 19th day as well, with the country reporting a sharp increase in the latest day number of new cases on Aug 26 morning.

“If we cross the absolute numbers (in Brazil and the United States), I won’t be surprised, but we also have a larger population,” the report quoted Giridhar Babu, epidemiologist at the non-profit Public Health Foundation of India, as saying.

But the country continues to have high and increasing recovery rate and low and declining fatality rate, which the government cites as success in its containment measures.

The latest data from India’s Ministry of Health and Family Welfare show that there were 67,151 new cases and 1,059 new deaths in the country in the past 24 hours as of Aug 26 at 8AM, taking their totals to 3,234,474 cases and 59,449 deaths. Both were sharp increases over the previous day’s figures

Seven other states, namely Assam, Gujarat, Odisha, Rajasthan, Kerala, Haryana and Madhya Pradesh had reported more than 55,000 cases each so far in that order. 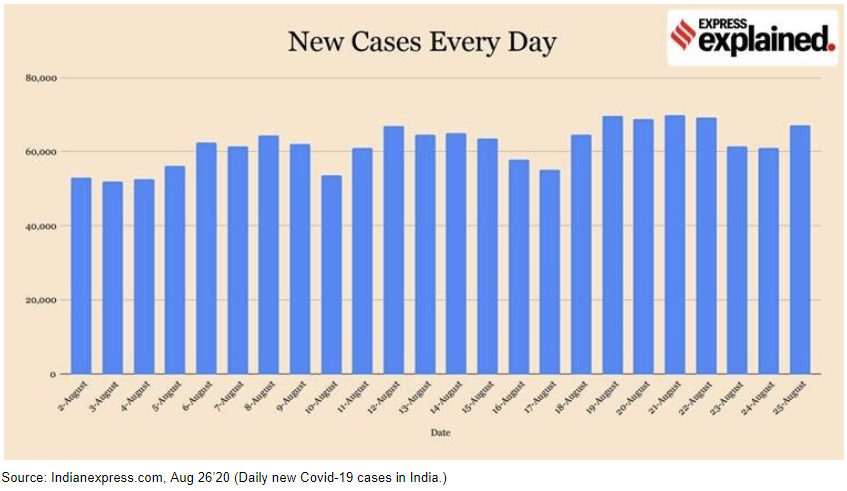 The total number of Covid-19 cases among Tibetans in India, Nepal and Bhutan stood unchanged at a total of 114 (↑0) so far, of whom 34 were active, 77 had recovered and three had died, according to the tally of the Central Tibetan Administration as of Aug 26 morning.