(TibetanReview.net, Sep16’20) – Covid-19 infections in India soared past five million on Sep 16 as a WHO envoy warned the pandemic was “still at the beginning”, reported the AFP Sep 16. Calling the global pandemic situation a “horrible” and “grotesque”, David Nabarro has told British MPs Sep 15 that it was much worse than any of the science fiction about pandemics.

“This is really serious – we’re not even in the middle of it yet. We’re still at the beginning of it,” he was quoted as saying as global cases were rapidly approaching 30 million, with more than 930,000 known Covid-19 deaths.

India’s Covid-19 cases jumped from 1 million to 2 million in 21 days. Then it took 16 more days to race past 3 million, 13 days more to cross the 4 million mark, and most recently 11 days to go past 5 million, reported the PTI news agency Sep 16.

Although India has reported high recovery rates and low case fatality, its number of active cases is set to rise to one million in another day.

Besides, the latest daily number of new cases, at 90,123, was more than the daily number of those who had recovered, at 82,961, leading to an increase in the number of active cases by 5,872.

Four states, namely Maharashtra, Andhra Pradesh, Tamil Nadu, and Karnataka have accumulated more than 470,000 cases each in that order.

Six other states, namely Haryana, Madhya Pradesh, Punjab, Chattisgarh, Jharkhand, and Jammu & Kashmir had reported more than 56,000 cases each so far in that order.

Besides, there were 10 other states/Union Territories with a total more than 1,400 cases each, namely, Chandigarh, Manipur, Arunachal Pradesh, Nagaland, Meghalaya, Andaman and Nicobar Islands, Ladakh, Dadra and Nagar Haveli, Sikkim, and Mizoram in that order. 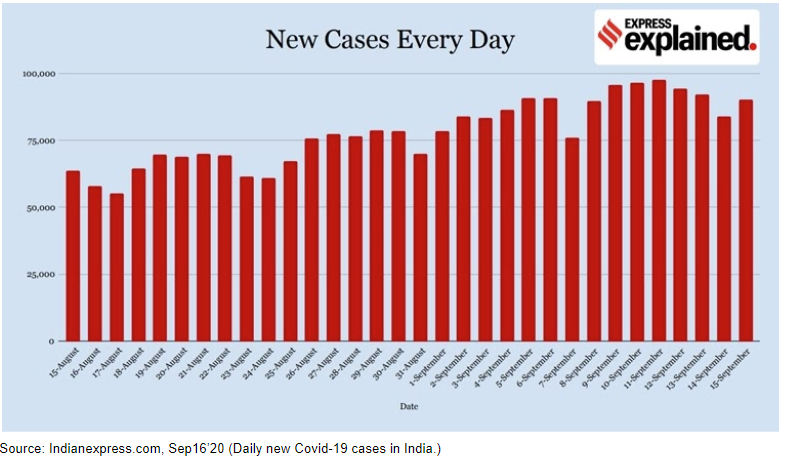 The total number of Covid-19 cases among Tibetans in India, Nepal and Bhutan had remained unchanged at 282 (↑0), of whom 163 were active, 108 had recovered and 11 had died, according to the tally of the Central Tibetan Administration as of Sep 16.