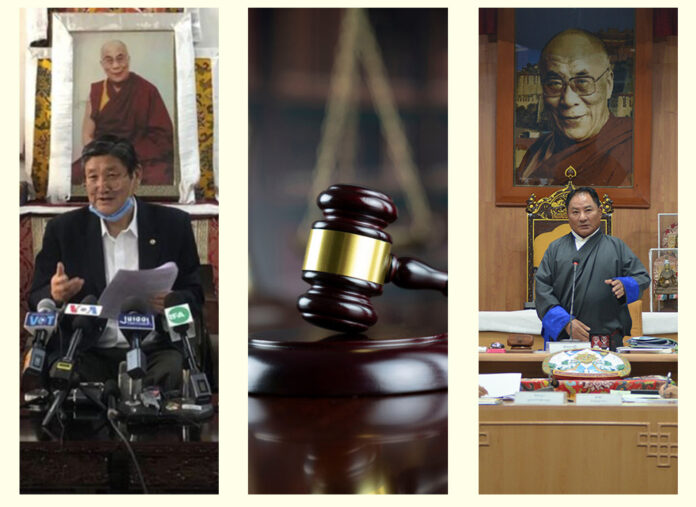 Tenzin Choeying* argues that the Tibetan Supreme Justice Commission should not have penalized the Standing Committee members of the 16th Tibetan Parliament in Exile (TPiE) as it did for their decision to cancel a session of the TPiE; he contends that depriving them of their right to vote for the preliminary exile Tibetan polls was too sacrosanct to be taken away “arbitrarily”.

The Covid-19 global pandemic, which has troubled governments everywhere, has triggered a constitutional crisis in the Tibetan government in exile–surely one of its most unexpected and unintended consequences, and one that Beijing must be watching gleefully. The crisis hinges on the question of whether voting is a fundamental right in the Tibetan exile polity or not.

First, a little background. Due to the pandemic and consequent travel restrictions, the Standing Committee of the Tibetan Parliament decided to postpone its annual Parliament session. The Supreme Justice Commission, exercising Suo moto power, punished the Standing Committee Members by stripping them of their voting rights, with the result that they were not allowed to vote during the Tibetan primary election held in January 2021. Did the Supreme Justice Commission have the right to strip the parliamentarians of their voting rights?

The SJC’s gross overreach of power, and the resulting responses by the Parliament (impeachment and dismissal of all three justices) and the resulting consequences (the Speaker of the Parliament resigning his office amid the uproar that followed) have all been a cascading tragedy of errors. The entire episode has now caused a parliamentary deadlock and the general populace is just tiredly waiting for the stalemate to end. The constitutional debacle has taken the color and the tone of toxic regionalism amid rampant polarization. We have seen a steady descent into chaos and confusion that threatens the integrity of our democracy. Our credibility in running a vibrant exile democratic institution has come under increasing scrutiny from our international supporters including a recent letter from the US State department.

As we celebrate the 61st anniversary of Tibetan Democracy Day, it is imperative to reevaluate and reexamine the constitutional promises of Tibetan democracy and its future challenges. While the separation of power amongst the three pillars of democracy is key to the working of the Tibetan Government in Exile (TGIE), the jurisprudence and the jurisdiction of all three organs of the government has become the center of significant debate in the last several months. No democratic system exists with an absolute separation of powers. Government powers and responsibilities often overlap, because they are often too complex and interrelated to be neatly compartmentalized. We must ask why we call our charter “Tsatrim Rinpoche” (Precious Charter). Essentially our Charter is the magna carta of the Tibetan people. One of the most important aspects within our Charter is that of the fundamental rights. Fundamental rights, unlike legal rights, are guaranteed to citizens under Chapter II of the Tibet Charter. Fundamental rights are those rights which require a high degree of protection from government encroachment. The Charter must provide a solid basis for the respect of the rule of law, democracy and good governance and must not merely become an ornamental document. Laws encroaching on fundamental rights generally must pass strict scrutiny to be held as constitutional. Following are the list of Fundamental rights under the current Tibetan Charter:

We can see that the “Right to Vote” is guaranteed under Article 11, Chapter II of the Fundamental rights of the Tibetan Charter.

While the ongoing stalemate has brought intense scrutiny in the legislation proceedings and its jurisdiction vis a vis its impeachment proceeding of the three judges, greater scrutiny should be paid to the constitutionality and the application of jurisprudence of the Tibetan Supreme Justice Commission in curtailing the right to vote for the standing members of 16th parliament during the preliminary phase of the 2021 election. The Supreme Justice commission is the guardian of fundamental rights and the torch bearer of freedom enshrined under the charter. Does the court’s behavior reflect apparent limitations of creativity in its interpretative exercise or is the court bound by jurisdictional limitations in the exercise of its judicial remedy? The critical question facing the Tibetan Supreme Justice commission is: what is the inherent value and the scope of fundamental rights of its citizens under the Tibetan charter? As the sole interpreter of the charter, is it constitutional to take away the fundamental right to vote in cases of civil contempt of court?

While many would argue that the Tibetan judiciary has its jurisdictional limitation being an exile judiciary with limited remedial tools, the key fact is that jurisdictional constraints and limitations cannot be used as an excuse for curtailing a citizen’s fundamental right. In some of the major democratic countries including India and the US, the right to vote is not a part of its fundamental right. In India, the right to vote has been recognized under the Article-326 of the Indian Constitution and is a legal right, not a Fundamental Right. It is also not mentioned under the Part-III of the Indian Constitution. Legal rights are the ones granted to people from any statute enacted by the legislature, unlike fundamental rights which are considered more sacrosanct and untouchable.

In the Tibetan context, the right to vote is expressly written under Article 11 of the Tibetan Charter as a fundamental right. If the right to vote is a fundamental right, then it cannot be arbitrarily curtailed or molded by any of the branches of the government. It is necessary to provide an effective mechanism for its full protection. We need to be better guardians of Tibetan democracy.