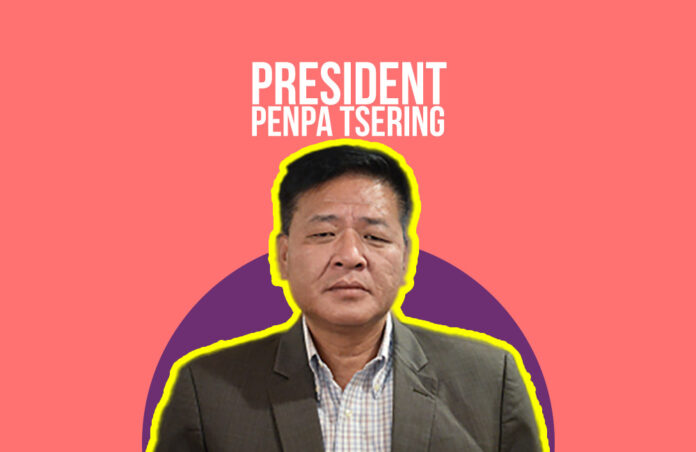 (TibetanReview.net, May14’21) – The Election Commission of the Central Tibetan Administration (CTA) has announced May 14 that Mr Penpa Tsering, former Speaker of the Tibetan Parliament in Exile (TPiE), has won election as the President of the CTA. Also announced was the results of the election to the 45-member, 17th TPiE.

The announcement made by the Chief Tibetan Election Commissioner Mr Wangdu Tsering Pesur shows that Mr Penpa Tsering won election as the Sikyong of the CTA by a margin of 5,417 votes, having polled 34,324 votes against Kelsang Dorjee Aukatsang’s 28,907.

It remains unclear, however, whether Mr Penpa Tsering will be able to take office on May 26 as scheduled. This is because during its Mar 2021 session, the TPiE removed the entire panel of justice commissioners of the Tibetan Supreme Justice Commission (TSJC) whose Chief Justice Commissioner has to administer the oath of office.

It remains to be seen how the TPiE will tiptoes around this technical hitch, possibly with a Charter amendment.

Outgoing Sikyong Lobsang Sangay has already made it clear that if Penpa Tsering cannot take office, the Charter requires him to continue to remain in office.

Apart from around 50 percent of the members of the 17th TPiE being new, 9 are women, all in the provincial seats. There is no nun elected for any of the 10 religious or other seats.

A total of 83,080 eligible Tibetans had registered to vote, making for a voter turnout of about 77%.

The results in vote numbers:

With record 8.27 million jabs on Jun 21, India looks to defeat Covid-19 by yearend

With record 8.27 million jabs on Jun 21, India looks to defeat Covid-19 by yearend