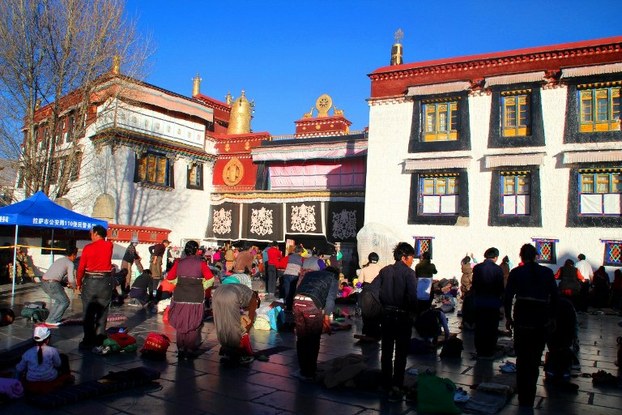 (TibetanReview.net, Mar10, 2018) – China treats all Tibetans as separatists, including even those who enjoy rank and fame within the government establishment. This fact was brought home by a Tibetan soprano in the Chinese People’s Liberation Army with more than 20 years of service as she appealed to Beijing on Mar 6 to stop the practice, recounting her own experience of such ill-treatment, reported the scmp.com Mar 6.

The report said that, speaking during a panel session at the Chinese People’s Political Consultative Conference (CPPCC), Guowa Jiamaoji, who was born in Qinghai province, stated that the discrimination shown by the authorities against people from her ethnic group was “detrimental to national unity”.

“I don’t think they should impose measures intended to deter separatists on the whole Tibetan race,” it quoted the 54-year-old as saying.

Guowa, who is known to have performed at numerous events for high-ranking officials, has said she clearly remembered the prejudice she experienced in the aftermath of the 2008 unrest which engulfed almost the whole of the Tibetan Plateau area.

“One time I led a group of performers to Beijing,” she was quoted as saying. “Everyone checked in to their hotels, but I wasn’t allowed to, because I was Tibetan.”

Despite her military rank and status as a member of the CPPCC – China’s top political advisory body – she has said the hotel staff simply refused to let her in.

“I showed them my CPPCC membership ID and my military ID but still wasn’t allowed to check in. I had to stay at a friend’s place,” she has added.

She has made it clear that the incident was not an isolated one; that in the years after the 2008 Tibet protests, she witnessed numerous examples of prejudice against Tibetan cadres, especially in Han-dominated areas. However, she has declined to provide more specific details when requested by the scmp.com.

The report noted that although Beijing says it treats all ethnic groups equally, it was not uncommon for local authorities to discriminate against minorities.

Guowa has said that even in everyday matters, such as telecommunications, there was evidence of an uneven playing field. “The mainland has a 4G network already, but in many parts of Tibet and Xinjiang [a restive western region that is home to the ethnic Uygur people], the network is still only 2G,” the report quoted the singer as saying.