(TibetanReview.net, Oct19’20) – The trend of recoveries from the Covid-19 infection exceeding new cases has continued uninterrupted for the last 14 days, noted the indianexpress.com Oct 19. And the continuing decline in new infections has ensured that the number of active cases has dropped below eight lakh, a level that previously existed around the end of August. Active cases had touched a peak on Sep 17, and there has been steady decline after that, the report noted.

The report further noted: “The growth rate of cases is now firmly under one per cent a day, the lowest ever. Positivity rate, or the number of positives out of those who are tested, has fallen below 8%, to a level that existed in mid-July. The case fatality ratio, or the number of deaths as a proportion of positive cases, has dropped to 1.52%, again, the lowest ever. The recovery rate is touching 90%.”

Four states, namely Maharashtra, Andhra Pradesh, Karnataka, and Tamil Nadu have accumulated more than 680,000 cases each in that order.

They were followed by eight other states with more than 200,000 each and included Uttar Pradesh, Kerala, Delhi, West Bengal, Odisha, Telangana, Bihar, and Assam in that order. 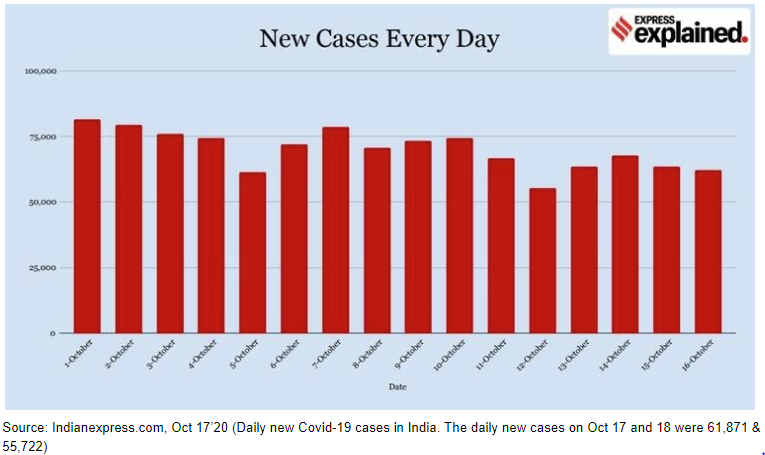 The total number of Covid-19 cases among Tibetans in India, Nepal and Bhutan had increased after remaining unchanged for two days to 723 (↑20), of whom 415 were active, 290 had recovered and 18 (↑1) had died, according to the tally of the Central Tibetan Administration (CTA) as of Oct 19.