(TibetanReview.net, Sep13’20) – India has recorded more than 1 million Covid-19 infections in the first 12 days of this month amid an unprecedented surge of the pandemic in the country and the caseload is only rising in an alarming way with Delhi and Mumbai, too, witnessing a peak in cases once again, reported the timesofindia.com Sep 12 and 13.

The Sep 12 report cited research by a team of analysts from BITS, Hyderabad, as estimating that India might soon cross a whopping 7 million cases by October, surpassing the US to become the country worst affected by the pandemic. The findings of the study have been done using advanced statistical modelling in place by mapping existing data, the report added.

Besides, the latest daily number of new cases, at 94,372, was more than the daily number of those who had recovered, at 78,399, which meant a substantial increase in the number of active cases by 15,973.

Four states, namely Maharashtra, Andhra Pradesh, Tamil Nadu, and Karnataka have accumulated more than 440,000 cases each in that order.

Six other states, namely Haryana, Madhya Pradesh, Punjab, Chattisgarh, Jharkhand, and Jammu & Kashmir had reported more than 52,000 cases each so far in that order.

Four more states/Union Territories, namely Uttarakhand, Goa, Puducherry, and Tripura, had reported more than 18,000 cases each in that order.

Besides, there were 11 other states/Union Territories with a total more than 1,400 cases each, namely, Himachal Pradesh, Manipur, Chandigarh, Arunachal Pradesh, Nagaland, Meghalaya, Andaman and Nicobar Islands, Ladakh, Dadra and Nagar Haveli, Sikkim, and Mizoram in that order. 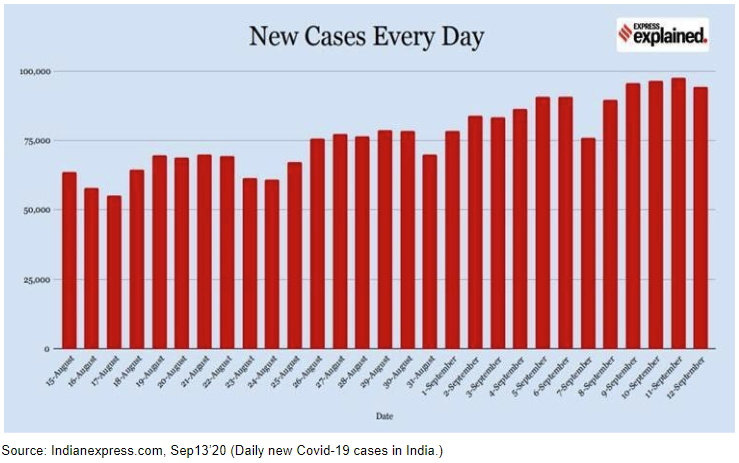 The total number of Covid-19 cases among Tibetans in India, Nepal and Bhutan had remained unchanged at 261 (↑0), of whom 153 were active, 102 had recovered and six had died, according to the tally of the Central Tibetan Administration as of Sep 13.