(TibetanReview.net, Feb20’19) – The largest Tibetan group outside the Central Tibetan Administration (CTA) is to mark the Tibetan national uprising day this year in a big way in India’s capital New Delhi. Beginning on Mar 10, the 60th anniversary of the event in Tibet’s capital Lhasa in 1959, the Tibetan Youth Congress (TYC) aims to bring around 1,500 activists and participants belonging to all its 80 regional chapters across the Indian subcontinent for the three-day ‘Chalo Delhi’ event.

The plan for the event was announced by the group at a news conference called at its Dharamsala headquarter on Feb 18 morning. 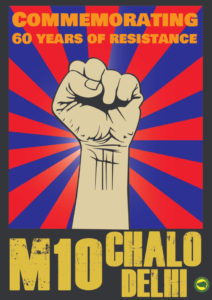 TYC President Mr Tenzing Jigme said a rally will be carried out from the Ramlila Maidan to Jantar Mantar on Mar 10, followed by a peace march from Khan Market to the United Nations office located just nearby the next day. There will then be a candlelight vigil on Mar 12.

Indian political and other leaders as well as supporters are expected to attend and speak at the event.

TYC campaigns for the restoration of Tibet’s independence from Chinese rule, a position varying from that of the CTA which seeks autonomy under Chinese rule.

The event takes place in the aftermath of grave anger in India over China’s reiteration of support for the leader of a UN blacklisted terrorist group based in Pakistan which claimed responsibility for killing more than 40 Indian paramilitary CRPF personnel in a suicide bomb attack in Kashmir on Feb 14.

Tibetan flag raised at over 2,000 Town Halls in Europe on 61st Uprising Day