(TibetanReview.net, May09, 2018) – The year 2017 saw the Chinese government intensify and strengthen its existing mass surveillance programmes throughout Tibet with dispatches of thousands of cadres and officials to farming and nomadic communities to conduct surveillance measures and political re-education campaigns under the guise of poverty alleviation work, said Dharamshala-based Tibetan Centre for Human Rights and Democracy in its latest annual report which was released on May 7.

It added that throughout the oppressive surveillance state, Tibetans continued to protest and self-immolate in order to draw attention to crimes against humanity and other human rights violations perpetrated by Chinese authorities in Tibet.

These have led to arbitrary arrests and detentions while torture aimed at extracting false confessions remained rampant in pre-trial detention. The centre said the common use of enforced disappearance meant that law enforcement agencies could subject detainees to torture and deny them the right to legal representation and fair trial. 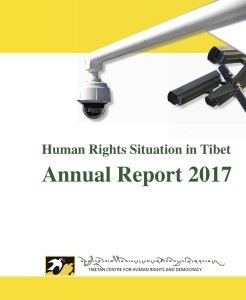 The introduction of the revised Regulations on Religious Affairs was stated to have led to the imposition of further restrictions on the right to freedom of religion and belief.

The centre also said that the top-down economic development model had deeply disempowering effects on the local Tibetan people and had led to an artificial growth in Tibetan economy fueled by massive state subsidies and dominance of Chinese migrants in urban centres.

The centre said the designation of large swathes of Tibetan land as protected areas resulted in a steady removal and relocation of Tibetan nomads from the most productive pasturelands, thereby depriving them of their livelihood sources.