(TibetanReview.net, Apr29’20) – The US has passed the grim milestone of being the country with a third of the world’s Covid-19 cases after crossing the one million mark while its deaths from the pandemic at more than 57,000 is also the world’s highest. In India too, the pandemic continues its relentless spread with the total number of cases crossing the 31,000 mark and the deaths exceeding 1,000 as of Apr 29 morning.

For India, it was yet another day of high increases in cases and deaths. The country reported 1897 new infections and 73 new deaths in the past 24 hours as of Apr 29 at 8AM (GMT+5:30), according to the tally of the country’s Ministry of Health. These were higher than the figures reported for the preceding 24 hours. The total number of infections in the country stood at 31,332 and the deaths 1,007. A total of 7696 had recovered, leaving a total of 22,629 cases active. 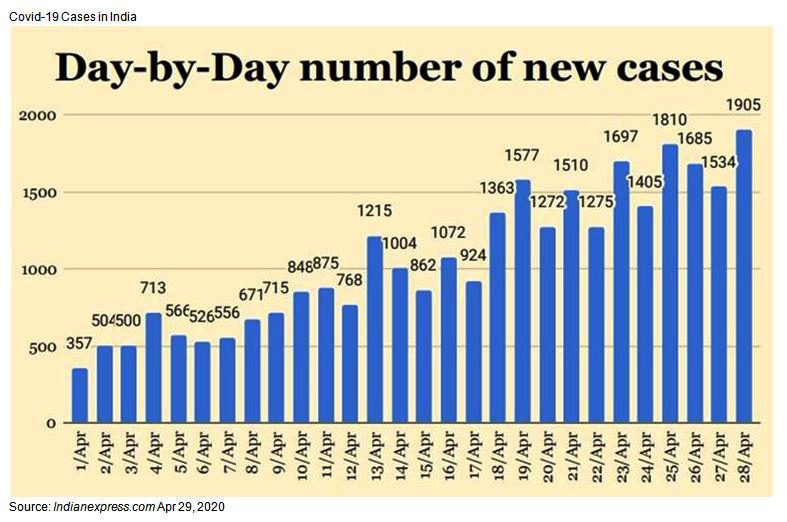 In India, as the nationwide lockdown nears its scheduled end on May 3, the number of hotspot districts (red zones) has come down to 129 from the 177 out of the country’s total of 736 districts.

Twenty of the red-zone districts account for 60 per cent of the novel coronavirus case load in the country, reported indianexpress.com Apr 29, citing data available with the Health Ministry.

The number of orange zone districts (which have not reported a case in 14 days) was stated to have risen from 207 on Apr 15 to 250 now.

Eighty-five districts did not record any fresh case in 14 days as of Apr 27. However, the composition of this list of districts had been changing.

In Delhi there is no green zone, meaning a district not affected by Covid-19. Nine out of 11 of its districts are red zones. Two others qualify as orange zones, which means they are getting two to three cases daily. The national capital is the third-most-affected state after Maharashtra and Gujarat.

“Delay in testing results is the biggest challenge we are facing. It is taking more than a week for the labs to send results, which is affecting containment measures,” timesofindia.com Apr 29 quoted a Delhi official as saying at a meeting.

Himachal Pradesh reported no new cases for the sixth day on Apr 28. However, the entry of nearly 23,000 stranded state residents in the past three days presented a challenge, reported indianexpress.com Apr 28.

They entered in private vehicles since public transport remains suspended during the lockdown period. More than 12,000 people returned to Una district while 6,733 and 2,852 people entered Kangra and Baddi police districts, officials were cited as saying.

Schools and other educational institutions in the state which had remained closed since Mar 16 would be reopened only after an overall improvement in the situation and the normalisation of services, tribuneindia.com Apr 28 cited the state’s Education Minister Suresh Bhardwaj s saying.

So far, we are hopeful that there will be no major loss of teaching days in case the situation improves by May-end,” he was cited as saying.