(TibetanReview.net, Sep14’20) – The World Health Organization reported a record one-day increase in global coronavirus cases on Sep 13, with the total rising by 307,930 in 24 hours, beating the previous record of 306,857 set on Sep 6. The biggest increases were from India, the United States and Brazil in that order, reported Reuters Sep 14, citing the agency’s website.  Deaths rose by 5,537 to a total of 917,417, with India, the US and Brazil, together accounting for half the number of daily increases.

India, in fact, leads the world in new cases reported each day and set a global record last week with 97,570 cases reported in a single day, the report said, citing its own tally based on government reports.

The report said Covid-19 infections were still rising in 58 countries, including surges in Argentina, Indonesia, Morocco, Spain and Ukraine.

Besides, the latest daily number of new cases, at 92,071, was more than the daily number of those who had recovered, at 77,512, which meant a substantial increase in the number of active cases by 14,559.

Four states, namely Maharashtra, Andhra Pradesh, Tamil Nadu, and Karnataka have accumulated more than 450,000 cases each in that order.

Six other states, namely Haryana, Madhya Pradesh, Punjab, Chattisgarh, Jharkhand, and Jammu & Kashmir had reported more than 54,000 cases each so far in that order.

Four more states/Union Territories, namely Uttarakhand, Goa, Puducherry, and Tripura, had reported more than 19,000 cases each in that order.

Besides, there were 11 other states/Union Territories with a total more than 1,400 cases each, namely, Himachal Pradesh, Chandigarh, Manipur, Arunachal Pradesh, Nagaland, Meghalaya, Andaman and Nicobar Islands, Ladakh, Dadra and Nagar Haveli, Sikkim, and Mizoram in that order. 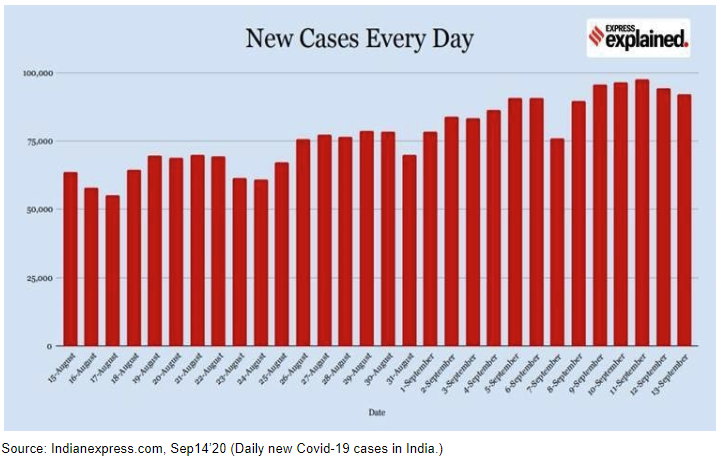 The total number of Covid-19 cases among Tibetans in India, Nepal and Bhutan had increased to 266 (↑5), of whom 158 were active, 102 had recovered and six had died, according to the tally of the Central Tibetan Administration as of Sep 14.