(TibetanReview.net, Aug11’20) – The world has reached the grim milestone of 20 million confirmed coronavirus cases and is edging closer to 750,000 deaths globally, with India now reporting the highest number of daily new cases. Meanwhile, the World Health Organization (WHO) has said it needed at least US $100 billion for its programme that seeks to accelerate the development and manufacture of a novel Coronavirus vaccine, and ensure that it is equitably accessible to everyone. And, it has indicated, that possibly not even 10% of that amount has so far been realized, reported the indianexpress.com Aug 11.

Perhaps the WHO should consider invoicing China for that huge minimum cost. After all, it was Beijing which deliberately let the global pandemic spread by suppressing or otherwise censoring information about it during is early outbreak in Wuhan, punishing whistleblowers, and then pressuring the WHO against declaring it a global emergency until it was too late.

The spreading of the disease was only accelerating, reported Reuters Aug 10, citing government reports. It took almost six months to reach 10 million cases after the first infection was reported in Wuhan, China, in early January. It took just 43 days to double that tally to 20 million, it noted.

India’s share in global Covid-19 numbers hit a new peak on Aug 9, when it reported 29% of all new cases worldwide and 21% of all deaths from the virus. On both counts, India had the largest share in the world on the day, reported the timesofindia.com Aug 11.

This was the 13th consecutive day the number of daily new cases in India increased by more than 50,000.

Six other states, namely West Bengal, Telangana, Bihar, Gujarat, Assam, and Rajasthan had reported more than 50,000 cases each so far in that order.

Besides, there were 12 other states/Union Territories with a total more than 1,000 cases each, namely Goa, Tripura, Puducherry, Manipur, Himachal Pradesh, Nagaland, Arunachal Pradesh, Ladakh, Andaman and Nicobar Islands, Dadra and Nagar Haveli, Chandigarh, and Meghalaya in that order.

Finally, there were two other states with less than 1,000 cases each, namely Sikkim and Mizoram in that order. 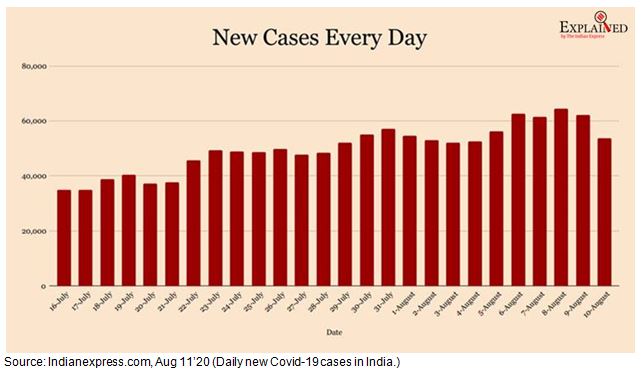 The total number of Covid-19 cases among Tibetans in India, Nepal and Bhutan stood unchanged at a total of 86 (↑0) so far, of whom 18 were active, 66 had recovered and two had died, according to the tally of the Central Tibetan Administration as of Aug 11 morning.